Parliament, viewed across the Rideau Canal. Photo by jby.

I’m now back from Evolution 2012 and in the process of getting back up to speed with non-conference life—i.e., a daily routine that isn’t eight hours (less a lunch break) of listening to people talking about science in fifteen-minute chunks, then going out to drink and talk about the science until midnight. Returning to a schedule in which I can think about the same scientific topic for hours on end is a bit disorienting.

For in-the-moment (more or less) writing about the meetings and everything discussed there, I suggest, of course, contributions by myself and the rest of the crew at Nothing in Biology Makes Sense, plus notes from Jeremy Fox at the Oikos blog (with posts for days one, two, and three). And, of course, there’s the formidable feed of updates via the conference’s Twitter hashtag, about which more below.

All in all, I had a great time, and saw a lot of really cool science. This was the first Evolution meeting I’ve been to where I was never at a loose end—every moment I was in the Convention Centre, I had someone to go see, or a talk to go hear. And, honestly, I finished the meeting without having checked in with everyone I’d have liked to.

My talk went pretty well, if I do say so myself. I finished well before the buzzer, and the questions afterward generally suggested that the audience understood what I was presenting. Plus, Pleuni Pennings, one of the authors of a cool series of papers I’d read and thought about a lot in preparing the analysis, came to the talk, and she had both good things to say, and some interesting suggestions.

I’ve posted my slideshow (which, I should warn you, presents preliminary results, and has relatively little explanatory text) online as a PDF document, in case you’re curious. The Canadian Museum of Civilization, site of the end-of-meeting banquet. Photo by jby.

The Ottawa Convention Centre was a great venue for a huge meeting, and the critical support—coffee, snacks, lunch—was good, if somewhat parsimoniously distributed. The final banquet at the Canadian Museum of Civilization was nice, but marred by badly distributed (and, ultimately, insufficient) food. The timer chimes—or, as Luke Harmon called them, the call of the Canadian Electro-Frog—weren’t as annoying as I’d thought they’d be, though I do think they made things a bit too regimented until folks got used to them.

This was also far and away the most-tweeted Evolution meeting I’ve been to; it was actually possible to sample what was going on in the other sessions thanks to other Twitterers at the meeting. We’ve come a long way since I first suggested people live-blog and tweet the 2009 meetings, and hardly anyone showed up to do it. It’s a pity, then, that the Convention Centre wi-fi was unprepared for the volume of traffic that inevitably resulted—and which was probably exacerbated by the fact that most of the U.S. residents in attendance were using wi-fi with their smartphones rather than rack up huge bills for using “foreign” cellular data services.

I was also happy to be involved in re-starting “Outgroup,” a meet-up of queer folks at the conference that hasn’t convened since the 90s, apparently. I’d heard about it from Chris Smith, who was at one of the last Outgroup gatherings, and we both agreed it’d be nice to do again. So we put up a handwritten notice on the conference bulletin board, and I put the word out on Twitter that LGBT folks should meet up for lunch Sunday—and people showed up! (Although, as Sarcozona noted, the group was an overwhelmingly male. C’mon, ladies!)

But so I made some nice new connections via Outgroup, and the lunch added an extra level of networking to the meeting: hearing a bit about being out in a professional context back when Don’t Ask, Don’t Tell counted as a compromise and marriage equality was a pipe dream; or what it’s like to negotiate a faculty contract in a state where state schools are forbidden by law to provide benefits for non-married partners. I think we’ll definitely be gathering Outgroup again next year, when Evolution meets in Snowbird, Utah.◼ Albatrosses: big, majestic, not particularly good at preventing their chicks from being eaten by mice. Photo by James Preston.

Evolution 2012, the biggest annual meeting of evolutionary biologists, is in Ottawa this year. It’s time to start planning for the trip, and my fellow Tiffin Lab postdoc John Stanton-Geddes was just checking out the accommodation options around the convention centre when he noticed something 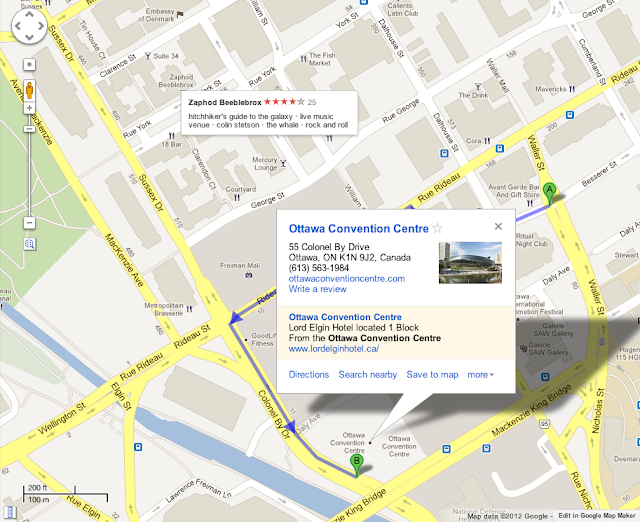 That’s right. There’s a nightclub named after Zaphod Beeblebrox within walking distance of what will probably be more than two thousand nerds looking for a place to unwind after a long day of PowerPoint and high-intensity schmoozing. Yes, they apparently serve Pan-Galactic Gargle Blasters. (And I also like the philosophy and mission statement.) Here’s hoping my presentation lands early in the conference schedule, because this place looks dangerous, in a good way. ◼