The New York Times reports that Leonard Nimoy has died at age 83. We’ve already seen his death and funeral on screen, in the movie that was possibly the best episode of the television show that made him famous. But that time, there was a sequel.

I’ve meant for a long time to write about how, for all its failure to directly represent the diversity of human sexual identities, Star Trek did have queer characters in leading roles — and Spock was the first of them. But I’m going to block out my evening tonight to re-watch The Wrath of Khan.

It’s still pretty jarring to see Disney’s sparkly branding all over the original anti-Disney take on fairytales, but man, this looks pretty good.

I’m on board just for Chris Pine’s delivery of “I was raised to be charming, not sincere.”

Richard Attenborough died Sunday, aged 90. Most of my generation probably know him best for Jurassic Park, but I’ve always favored his role as the mastermind of the Great Escape: 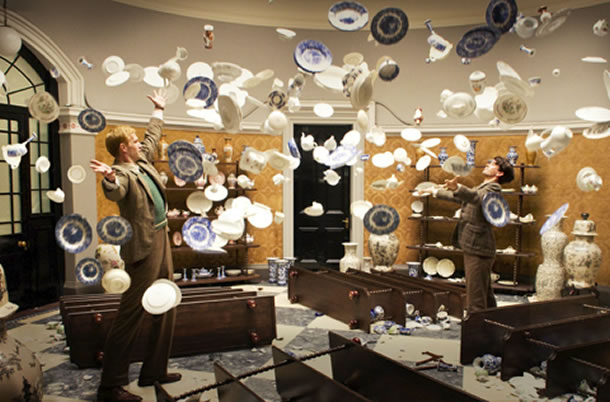 Via BrowBeat, a supercut of shots from Stanley Kubrick’s films, highlighting the vanishing-point composition that recurrs in them all.

Watch it in full-screen mode.◼

Against my better judgement (okay, not really) I’m starting to get excited about the upcoming prequel to The Lord of the Rings.

By adding Bilbo Baggins to his filmography, I think Martin Freeman is officially defining his career in the role of the Universal English Everyman, the straight man to wonders: John Watson, Arthur Dent, even Tim, his breakout role on the original version of The Office. Next up: Newton Pulsifer from Good Omens?◼

Via io9: An educated/hilarious guess as to how the trailer for 2001: A Space Odyssey would look if the film were released in 2012. (Maybe turn down the volume before hitting “play”—this gets loud.)

If you’ve familiar enough with the actual film (Or maybe too familiar? Nah.) the real fun of this is noticing which individual images are crammed into rapid-fire, action-y montages.◼

You guys, this is happening:

And check out the casting: Hugh Jackman is Jean Valjean (yay!), Russell Crow is Javert (um, okay). The Thénardiers will be played by Sacha Baron Cohen and Helena Bonham Carter. And in a particularly nice touch, the Bishop of Digne will be played by Colm Wilkinson, who was Valjean in the 1985 cast.

I can’t wait for Christmas.

In my favorite long read of the week, David Shechner of Overthinking It sets out to determine whether Indiana Jones could’ve survived an atomic bomb from the safety of a lead-lined refridgerator, as depicted in The Kingdom of the Crystal Skull.

Spoiler alert: Indy (and the franchise) wouldn’t have survived, in the real world. But exactly how Professor Jones would most likely meet his end is a much more enjoyable question. Here’s a tiny bit:

Sadly, the lead and steel shielding which the authors intend to protect their protagonist from ionizing radiation can itself become a source of it. While beta decay constitutes a relatively small portion of the average nuclear device’s output, what little sprinkle the Frigidaire receives it will transmute, in kind, into an X-ray bath for its inhabitant. It’s sort of like the way a Russian Sauna works, but instead of hot coals there’s a nuclear explosion, and instead of steam there’s a burst of X-rays, and instead of a wood hut it’s a Frigidaire, and also you’re dead. [Link sic.]

As additional evidence of Shechner’s scientific bona fides, he presents the whole analysis in the persona of the third reviewer. I don’t think I’ve enjoyed a takedown of one of George Lucas’s late-career cinematic catastrophes so much since Anthony Lane wrote, in reference to Yoda’s diction in Revenge of the Sith, “break me a fucking give.” ◼