The Queer in STEM team. Photo by jby. A book-sale table at Twin Cities Pride 2013. I bought some books at the sale—but not any of these. Photo by jby.

I read 17 books in 2013. I actually have no idea how this stacks up to past years, though I did set myself the goal of 20, and that proved to be a bit ambitious. Here’s the list, more or less in chronological order, with notes about what I thought of each: Taken on my Saturday run around the old neighborhood.◼ 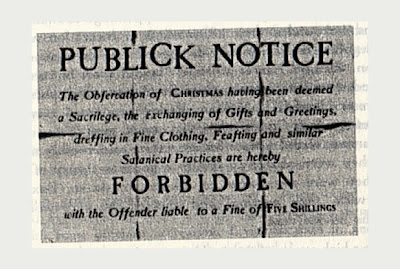 Image via the Tamworth Herald.

On the off chance that anyone you encounter over the course of this holiday season should happen to mention the “War on Christmas,” and go on to complain that political correctness has stifled the celebration of real, American traditions, the appropriate response is to nod in vigorous agreement and say, “I know! And the worst part is, who has five shillings to pay the fine these days?”

Have a merry Foolstide, everyone!◼ Photo by The Tedster.

And finally, a video I may very well use in class a few weeks from now: some thoughts on how to read science news. Part of the 2010 Joshua tree field crew. Photo by jby.

Thanks to Anne Jefferson on Twitter, I see that Alex Bond has called our collective attention to Nature‘s great feature on gender equity in the sciences by making the whole thing as personal as possible: asking people to total up their collaborators and see what female-to-male ratio they find:

There’s lots out there on women in science, technology, engineering, and mathematics (STEM), the challenges they face, and the degree to which they are under-appreciated (including historical figures).

Well, the data in the Nature article had to come from somewhere. So as an actively publishing scientist, I contribute to this phenomenon (regardless of whether my data were included in Nature).

It so happens that I just put together a comprehensive list of everyone with whom I’ve ever co-authored for a grant proposal, so this took exactly as long as I needed to go down the list and recall everyone’s gender identity. As of right now, I have 42 (!) co-authors; with the addition of three undergrad research assistants who didn’t rate (or haven’t yet rated) co-authorships, I’ve directly collaborated with 29 men and 16 women, which gives a gender-gap ratio of 0.55. That’s better than the US-wide average of 0.43 given in the Nature piece, but still not nearly what I’d call parity.

Folks are tweeting their ratios with the #MyGenderGap hashtag, so it’ll be interesting to see what emerges.◼ No big deal for some animals? Photo by Will Clayton. Yeah, so this is about what we can expect from now till March.◼