The Reem-Kayden Center for Science, Bard College. Photo by jby.

Twenty-one days, 12 schooldays, 24 class periods, 54 hours of class time … and now the 2013 Citizen Science course at Bard College, my first attempt at teaching all on my own is over. Actually, it’s been over for a couple days. I’ve flown back to Minneapolis, unpacked two suitcases full of laundry and books, spent a day at the office picking up the threads of work I left behind for a month, cleaned and restocked the kitchen, and posted photos from my weekend off in New York City.

Oh, and submitted the final grades.

But so now that it’s all over, how’d it go? Pretty well, on the overall. As much as Citizen Science is meant to be a crash course in scientific reasoning for Bard’s first-year students, it’s also a crash course in teaching for folks like me, who come to the job with experience as teaching assistants, but not in planning or executing a whole course. And judged solely on that level, Citizen Science is amazing.

Let me run through the numbers again: 12 four-and-a-half-hour days with the same 20 first-year students. I spent a fair bit of my Christmas holiday preparing lesson plans, and ended up reworking almost all of that planning in the last three days before class started. From there on, the average workday was something like:

With variations for a four-day rotation in the wet lab and another in the computer lab, plus a “civic engagement” day in which the first-year students go to a local public school to guest-teach science classes for half a day, that’s pretty much the shape of the course. It was exhausting. Boot camp for college teaching. Learning to swim by jumping into the middle of the Hudson River in January.

But that schedule leaves out a multitude of support. First and foremost, Citizen Science faculty have no other personal responsibility than the teaching. Meals are in the campus cafeteria, which provides just fine. Housing is on campus—yes, my dorm room was tiny and ill-equipped, but it was also right around the corner from my classrooms, the communal faculty workspace, the cafeteria, and the gym. So: no cooking, no commute.

Also, it must be said, the Bard student body is pretty great. There were the inevitable exceptions, but most of my class section were smart, friendly, and willing to at least try to tackle any topic I threw at them. Sometimes they were alarmingly informal, and I had to bend a little to accomodate the local concept of punctuality, but if a classroom full of unknown students is a cliff from which a rookie prof dives, these students were also the trampoline at the bottom.

But most importantly, Citizen Science teaching is collaborative. Intensely collaborative. From the moment I arrived on campus, most of my conversations with other faculty members were about lesson plans: what had worked last year, what spurred an amazing class discussion earlier today, what part of the lab procedure left every student confused and irritated. We all started with a six-inch-thick binder of readings, case studies, and worksheets, and then added our own ideas—and swapped, reworked, cut, and rejiggered each other’s ideas. For me, the flagship example of this was the computer lab. The resource binder had some material on SIR models of disease spread in a population; I wanted to try and teach my students some of the programming language R. So why not build SIR simulations in R?

One faculty member had already developed a nifty interactive model of disease spread in a simulated social network, which included many of the basic concepts necessary to understand more general models, so I started the computer section with that. Next up was an intro-to-R worksheet I’d banged out over the holidays, which covered exactly the programming concepts necessary to code the model, and nothing more. A couple of other faculty members test-drove that worksheet in their own class sections, which had the computer lab earlier in the schedule than mine.

One night’s reading assignment was Anderson and May (1979) [PDF], the original SIR paper; the next day we walked through the math in class. Then I gave my students a worksheet covering some of the graphing capabilities of R, which another of the R-using faculty had developed as followup to my introduction worksheet. And finally, I walked them through the coding necessary to create a simple SIR recursion simulation, complete with a plot of populaiton dynamics over time.

The result wasn’t unqualified success, by a long shot. Some students bogged down in the programming; many glazed over when I started writing equations on the whiteboard. Almost everyone seemed to like drawing graphs in R, though a lot of folks got frustrated by the technicalities of programming syntax even in that context. In the end, most students were able to at least follow me through coding the SIR model, but that was all we had time to do. Given another go-around, I’d provide more structure in the final stretch, with a worksheet that walks through the model coding and how to use the finished model to test specific hypotheses about epidemic dynamics. Also, I’d probably lead with the graph-making, which was more engaging than just pushing variables around on the command line.

But on the whole, I think it worked. My students coded SIR simulations in R, which actually responded to parameter changes the way they were supposed to, and generated pretty graphs in the process. Several students even told me, afterward, that they’ll use R for graphing in the future.

That outcome was really only possible because there were other faculty working on similar ideas, testing things out for me, sharing their own experience and materials. From what I hear, that’s a resource I can’t expect to have when I start teaching my own “real” courses as a full-fledged faculty member. And yet it’s the biggest reason why Citizen Science left me feeling like, actually, I might be able to pull off this whole professor-ing thing after all.◼

I did manage, in the course of three weeks in New York state, to take a weekend for some time in New York City. It was nice. Very nice, even. I’m back from Bard, but still getting my [stuff] together. Photo by jby.

This behind-the-scenes tour of The University of Montana’s zoological museum is pretty excellent. And the only full-time employee of the museum, one Emily Graslie, who is so excellently nerdy-charming in this video? She’s a volunteer.

And apparently this is the start of a series. In fact, here’s episode 2 already.◼ That waking up to fresh snowfall, which won’t interfere with my schedule, and which I won’t have to shovel, is lovely and magical. Photo by jby.

Things I am at least starting to learn, a week and a half into this January-term teaching gig at Bard College (With a couple updates about 17:30h, same day.): Richard B. Fisher Center for Performing Arts. Photo by jby. Which is to say, it’s about what you’d expect for a Northeastern liberal arts college which has (1) been around awhile, and (2) has money for Frank Gehry. It’s a nice place to walk around in the winter sunshine, after a morning working in this building:

Reem-Kayden Center for Science and Computation. Photo by jby. RKC from another angle. Photo by jby.

Had a good first meeting with my class this afternoon; we hit the ground running tomorrow!◼ Two days after ringing in the New Year, I had to wake up early to catch an eastbound plane. I’m starting out 2013 not by plunging back into the lab-greenhouse-office rotutine, but with a 3-week guest teaching gig at Bard College in upstate New York, as one of the faculty for Bard’s winter-term course Citizen Science.

Citizen Science is part of the Bard freshman seminar, and it’s primarily meant to help bring students up to a basic level of understanding how science and scientific reasoning work. Since the entire freshman class takes it, Bard brings on about two dozen temporary faculty to teach Citizen Science—and, while there are some elements of the course that are in place before we arrive, each faculty member builds his or her own curriculum.

That makes this my very first effort at building and teaching a course from (more or less) scratch. There’s a lot of starting material to work from, provided by the Bard faculty running the program, and by other CS faculty—course development is highly collaborative. But ultimately, what my students do for the next three weeks is entirely up to me—I have to pick readings, plan four and a half hours of in-class acitivites a day, and figure out appropriate homework assignments.

I spent most of my holiday vacation sketching out plans for the course, but I’ve still been scrambling to pull things together in the three days I’ve been at Bard. CS starts on Monday, but there’s an introduction/opening event this afternoon, at which I’ll meet my students and give them their first assignment, Robert Fisher’s essay “Mathematics of a lady tasting tea.” My class roster shows only three science majors out of 20 students—this will be one long exercise in talking about science with educated people who, after this month, may never set foot in a wet lab again.

Which is exactly what I signed on for.◼

So several people (all using Chrome) have now alerted me that they’re getting this alert when they navigate to www.denimandtweed.com: 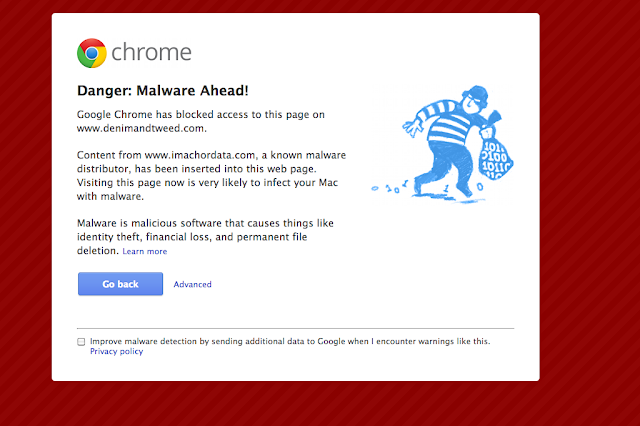 Here’s what seems to be going on. That “known malware distributor” site, www.imachordata.com is Jarrett Byrnes‘s blog — apparently it’s been hacked, and Jarrett hasn’t been able to clean it up yet.

Why does this generate an alert for Denim and Tweed? I believe it’s because somewhere (probably multiple places), D&T links to imachordata.com — both because I’ve linked to posts there, and because Jarrett has commented here. However, so far as I can tell, there’s no malware on www.denimandtweed.com. Both an independent scan of the site by Sucuri and Google’s “Safe Browsing” diagnostic give www.denimandtweed.com a clean bill of health.

If anyone has further information, or some idea what I ought to do beyond these checks, please let me know in the comments. (I haven’t been able to replicate the warning message on any browser.) If imachordata.com isn’t cleaned up soon, maybe I’ll have to find and purge the links to it.◼