Via CZ, and many of the more discerning parts of the Internet.◼

This behind-the-scenes tour of The University of Montana’s zoological museum is pretty excellent. And the only full-time employee of the museum, one Emily Graslie, who is so excellently nerdy-charming in this video? She’s a volunteer.

And apparently this is the start of a series. In fact, here’s episode 2 already.◼

For cooperation to work, everyone involved needs to know what the others are willing to contribute in order to decide what she will contribute. You might think that only humans can achieve that kind of back-and-forth negotiation, but a paper recently published online by Proceedings of the Royal Society suggests otherwise. In it, ornithologists decode the negotiations [$a] that allow sociable birds to share the task of watching for predators. Pied babblers (Turdoides bicolor) are sociable South African songbirds, which live and forage for food in groups. During foraging, some adult babblers act as sentinels, perching above the ground to scan for predators, and alerting the rest of the foragers if any danger shows up. Sentinel behavior is cooperative—sentinels free the rest of the group to concentrate on feeding, but sentinels themselves cannot forage. The study’s authors, Bell et al. hypothesized that sentinels might communicate how long they’re willing to stand watch to the rest of the group, so as to prompt new birds to take up watch and given the current sentinels a break to feed.

The authors first established that how hungry a babbler is determines how long he or she is willing to stand watch, which they did by feeding the birds with meal worms immediately after they concluded a period of sentinel duty. Babblers receiving ten worms returned to duty faster than those receiving just one, and stayed on duty longer. Further feeding experiments and observations established that both foragers and sentinels called to each other less frequently when they were well fed, that sentinels called more frequently the longer they stayed on watch, and that sentinels who ultimately stayed on watch the longest also called the least frequently in their first minute on watch.

So call frequency is the babblers’ signal for how badly they want to forage—foragers hearing higher-frequency calls from sentinels should take them as a call for relief; and sentinels hearing lower-frequency calls from foragers should take them as permission to leave the watch and start foraging. To test this hypothesis, the authors played recorded calls to foragers and sentinels, and found that the birds responded as I’ve just described. The apparent babble of the babblers, then, is actually a perpetual negotiation about who should be on sentinel duty—sentinels complaining when they get hungry, and foragers telling the sentinels, “Not yet! I just need to catch a few more worms.” A study in this week’s Proceedings of the Royal Society B suggests that the sexually dimorphic pattern of birdsong we’re used to in temperate latitudes — with males singing elaborately and females usually not — evolves because female birds stop singing when their species move to more northerly latitudes [$-a]. Why this is, however, remains an open question. The study’s authors reconstruct the evolution of home range (temperate versus tropical) and sexual song dimorphism (both sexes singing versus only males singing) in the New World blackbirds, the family that includes orioles, cowbirds, and red-winged blackbirds (pictured). The reconstruction reveals a strongly significant association between the evolution of male-only singing and transitions from tropical to temperate breeding ranges. The authors discuss this transition in a few key groups, including North American red-winged blackbirds (Agelaius phoeniceus) and their sister species, the Cuban red-shouldered blackbird (A. assimilis):

Females of A. assimilis are nearly indistinguishable from conspecific males in song structure and song rate and are also similar in plumage and body size … whereas females of A. phoeniceus differ considerably from conspeicific males in these traits …. it is clear that the changes in female song and plumage must have occurred quite rapidly. [In-text citations omitted.]

As clear as the observed pattern is, however, there doesn’t seem to be a good general explanation for it. The authors point to cases where female singing is lost within tropical-breeding lineages, which might help disentangle the effects of latitude and other evolutionary forces generating the observed pattern. In these cases, loss of female song is associated with colonial nesting and polygynous breeding, whereas singing by both sexes is associated with year-round pairing.

The temperate-breeding blackbirds tend to be migratory, with males often arriving at the breeding range ahead of females to establish nest sites and territories. In these cases singing by the males serves to attract females and to announce ownership of territory. Could that migration-induced division of labor lead females to give up singing? I’m just an amateur birder, but it sounds plausible to me.

Very rarely, birds develop male and female characteristics, and more rarely the difference is symmetrical. From Minnesota birdnerd (via kottke.org, a Northern Cardinal in just such a predicament: 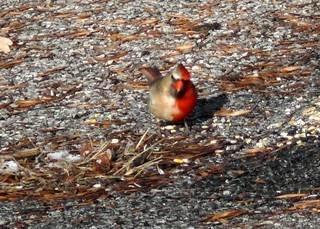