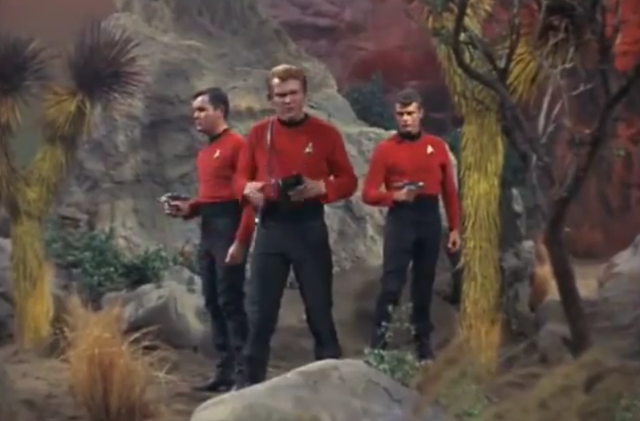 You’ve already read my fanboy glee in anticipation of John Scalzi’s new novel Redshirts, so it’s only fair to report that I have already finished the book, and I can honestly say it was everything I hoped for.

“Redshirts,” on the original version of Star Trek, were the nameless, red-shirted security officers who’d beam down to strange new worlds alongside the stars of the show—and, if danger should present itself, it usually did so by killing a redshirt. Redshirts, the novel, is about what happens when some redshirts start to realize that their mortality rate is more consistent with a campy TV show than actual military service, even military service in space.

The result is a short novel that might be what you’d get if an episode of Star Trek were exposed to exotic radiation in an ion storm and spontaneously developed self-awareness. Although many of the resulting jokes have been made before (notably in the also-excellent movie Galaxy Quest, which is required viewing for the thoughtful Trek fan), Scalzi draws them out of genuine characters caught in a plot that ventures deep into the weirder end of Trek‘s repertoire without going off the rails.

I can’t go into any meaningful detail about that plot without spoiling it, so I won’t. I can say, however, that Redshirts is hilarious and humane. It’s a story about decent, rational human beings trapped in an indecently irrational universe, which is nevertheless the very kind of universe that human beings routinely imagine in every possible venue for fiction. Scalzi’s ultimate conclusion—that an author has something approaching a moral obligation to tell good and worthy stories with the characters he imagines—gives the story far more depth than mere fanfic.◼

So, John Scalzi’s forthcoming book, Redshirts is pretty excellent, from what I’ve seen of it. (The first four chapters are available online as a preview.) In a nutshell, it’s “Rosencrantz and Guildenstern are Dead,” but for Star Trek instead of “Hamlet.” So when Jonathan Coulton wrote a song to go with the book, it was only a matter of time before someone mashed it up with actual footage of redshirts* meeting their various and inevitable ends.

Anyway, if all that doesn’t make you immediately want to watch, or if you’re about to leave a comment asking what, exactly, is a “redshirt,” then you probably should just wait for the next post.

*Caution: that link also includes a video of Scalzi covering the song on a ukelele, for which I refuse to vouch.◼