One of these tulips is not like the others. Photo by Jørund Myhre.

On the last day of April, two blog carnivals—collections of links to posts on a given topic—are freshy posted, and both are worth some of your surfing time.

First, over at Seeds Aside, is a double March/April edition of Berry-go-Round, which rounds up online writing about all things botanical, with everything from peppers to savannah treetops to electrical signalling within the tissues of carnivorous plants.

And then over at her blog on Scientopia, Scicurious is hosting an edition of the Diversity in Science Carnival devoted to “imposter syndrome,” the nagging fear of secret inferiority that almost everyone seems to feel at some point in a scientific career. In science, imposter syndrome can be especially troublesome for women and members of minority groups, who may not see many folks that look like them amongst their colleagues.◼

There’s a new edition of the Diversity in Science blog carnival out today, too: Urban Scientist DNLee rounds up stories of Native Americans in science, technology, engineering, and mathematics disciplines for Native American Heritage Month. It includes meditations on the value of cultural diversity in science, celebrations of individual scientists, and discussion of scientific insights from Native cultures that we’re still just beginning to recognize. ◼ Even though the queer nerd is a long-established phenomenon, and a pretty common one these days, we’re not necessarily very visible in science, technology, engineering, or mathematics disciplines. Even cutting-edge fields can be surprisingly conservative, and a lot of us end up in industries or academic departments where people are still not asking or telling. And on the other hand, science often has a lower profile within the queer community than it deserves—how many queer scientist types have you seen on TV lately? Yeah, me neither.

(Maybe Willow Rosenberg? But she ditched computer science for magic, and she’s been off the air since 2003!)

As just one example of this, when Alberto Roca and I went looking for science-related videos on the “It Gets Better” project website, where queer adults can post their stories to encourage queer kids who are dealing with bullying, neither of us found much. Big tech companies like Microsoft, Pixar, Bayer, and Eli Lilly are well represented, but search for individuals’ videos labeled “science” and you get … not a lot.

So where are the examples of queer scientists for today’s nerdy gay, lesbian, bi, and trans kids to look toward?

Well, actually, we’re all over the place. For last October’s National Coming Out Day, Steve Silberman and Maggie Koerth-Baker put together a wonderful double feature at BoingBoing, compiling the personal stories of LGBT scientists, and presenting an in-depth interview with endocrinologist Neena Schwartz. Now, for the Pride edition of the Diversity in Science blog carnival, we have another array of voices from across the science blogosphere: queer and allied scientists and science fans, discussing everything from gay history to the science of sexuality to their personal experiences as sexual minorities in scientific workplaces.

The carnival commences after the jump!

END_OF_DOCUMENT_TOKEN_TO_BE_REPLACED

There’s just a week left to send in your posts for the Pride edition of the Diversity in Science Blog Carnival. The carnival will be right here at Denim and Tweed on 30 June, so I need submissions by the 27th so as to have time to put it all together.

Let me add a point I don’t think I’ve made before: blog carnivals are traditionally about aggregating links to blog posts, but you don’t have to write a thousand-word essay to contribute. You can send in photos, videos, even favorite songs—or send links to other folks’ work (credited appropriately!) that you think the DiS audience would appreciate. Carnivals celebrate by aggregating, and we’re interested in all kinds of media.

You can submit posts and other material directly to me by e-mailing a link, or use the handy online form Alberto Roca has set up at MinorityPostdoc.

Thanks to all the folks who have contributed so far! Happy Pride Month! There’s just 26 days left to send in your posts for a special Pride edition of the Diversity in Science Blog Carnival to be hosted right here at Denim and Tweed at the end of the month.

Alberto Roca of Minority Postdoc and I are looking for blog posts and other online writing about the science of human sexual diversity, the experiences of sexual minorities in the sciences, and everything in between. Write something brand new, or submit a classic post. Tell us how science, engineering, or technology helped it get better for you—or tell us how they didn’t help at all.

You can submit posts directly to me by e-mailing a link, or use the handy online form Alberto has set up. Please send submissions by Monday, 27 June so I have time to put everything together for the 30th.

Thanks to all the folks who have contributed so far—it’s shaping up to be a great carnival.

Updated, Friday 13 May: Added a suggested topic and a link to the “recent NAS report.” 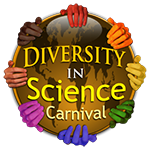 June is Pride Month in the U.S., and I’m proud to be joining Alberto Roca of Minority Postdoc to commemorate the month with a blog carnival. On 30 June, Denim and Tweed will host a new entry in the Diversity in Science blog carnival, collecting posts about sexual minorities in the sciences, the science of sexual minorities, and more. For Coming Out Day last October, Steve Silberman and Maggie Koerth-Baker did a fantastic job bringing together the stories of lesbian, gay, bisexual, and transgendered scientists and engineers—Alberto and I are hoping to build on and extend that theme.

GLBT folks and allies who work in the sciences or write about science are invited to submit new posts as well as relevant pieces from their archives. We don’t have a Blog Carnivals submission page online yet (Alberto is working on reviving the DIS page), but you can send links with background information to me at the Denim and Tweed e-mail account—just put “Pride Month blog carnival” in the subject line. Please submit by Monday, 27 June to give me time to put together the carnival post.

Suggested topics include, but are not limited to:

Again, while we’re hoping to prompt new writing on these topics, we’re also delighted to have folks contribute previously posted work. Please send links to specific posts, and include any information you think might be helpful for me to introduce your contribution.