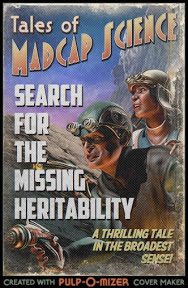 It’s been a busy week at the other blogs with which I’m variously affiliated. So busy that I’m going to run down what’s up at Nothing in Biology Makes Sense! and The Molecular Ecologist in a single omnibus post.

First up, Nothing in Biology Makes Sense!: My younger brother Jon (@Bonovox1984), who’s in his third fourth year of medical school, led off with a post on a new study of “herd immunity”—the effect whereby people who haven’t been vaccinated benefit from reduced risk of disease if they’re living around lots of people who have been vaccinated. Then Prosanta Chakrabarty (@LSU_FISH) continued the NiB tradition of blasphemy by explaing why creationism is not—and can never be—science. And finally, we announced that Nothing in Biology will be hosting the March 2013 Carnival of Evolution—you can see how to submit your evolution-related blog posts and other online content right here.

Then, over at the Molecular Ecologist, Tim Vines posted Molecular Ecology‘s first-ever list of top reviewers to provide some recognition for the volunteer labor that goes into a good peer-review process. And I wrote about a cool new study that goes looking for the “missing” heritability in quantitative trait locus studies—and finds a lot of it, with the help of lots of statistical power. (It turns out that a lot of the missing heritability is hiding in genes of small effect, which is exactly what some folks have long speculated.)◼