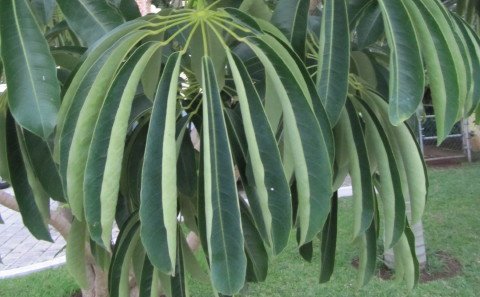 Cecropia obtusifolia provides food for ants that come and protect it—unless caterpillars get there first. Photo by wallygroom.

Imagine you need a team of security guards. To find them, you decide not to place an ad in the local paper or on Craigslist. Instead, you build an apartment complex next to your home, complete with a full-service cafeteria providing free hot meals 24 hours a day. You leave the front doors unlocked, then hope that anyone who shows up to live in the apartments will also keep an eye on your home.

If you took that strategy to protect your assets, you’d have to be crazy. But that’s pretty much what ant-protected plants do all the time. They grow hollow structures called domatia, secrete nectar from special structures, and even produce tasty and nutritious “food bodies.” Then they wait for ants to move into the domatia, eat the nectar and the food bodies, and hopefully chase away anything that might want to do the plant harm. The crazy thing is, it works.

One gap in the ant-protection mutualism is the period when an ant-protected plant hasn’t grown big enough to support a whole colony of ants. In this early stage, ants won’t colonize the plant, but other insects might be quite happy to take the rewards that are already being offered. That’s exactly what larvae of the butterfly Pseudocabima guianalis do—they make themselves at home on unprotected ant-plants.

The ant-plant Pseudocabima caterpillars target is Cecropia obtusifolia, a shrubby Central American tree that relies on ants in the genus Azteca for protection. Azteca ants make vicious and well-coordinated bodyguards. Here’s video Ed Yong posted last year, showing a bunch of the ants flushing a hapless moth into an ambush.

However, Cecropia saplings can’t produce enough food to support a colony of ants until the plants grow to more than a meter tall. What’s too little for thousands of ants is a feast for a Pseudocabima caterpillar, however. Each caterpillar builds a silk shelter around a region of the plant that grows food bodies, and settles in to eat. As it grow larger, the caterpillar moves into a domatium near its original shelter, covering the entrance hole with silk. Finally the caterpillar pupates inside the domatium, emerging as an adult to lay eggs on another unprotected Cecropia plant.

Eventually the Cecropia saplings grow large enough to attract ants, who run off the caterpillars. However, as the paper I linked to above describes, the caterpillars seem to be able to resist an ant colony’s establishment on the plant—the silk shelters prevent ants from getting to the best sources of food. Cecropia saplings occupied by caterpillars didn’t seem to suffer more herbivore damage than ant-protected plants, but they did grow more slowly over the course of several years’ observations. Caterpillar-infested Cecropia plants were also more vulnerable to infection by a fungus, which the ants removed quite effectively.

Interestingly, though, caterpillar-infested plants also produced less food than those guarded by ants. This is a point of circumstantial evidence for a new model of mutualism I wrote about earlier this year, in which cheating is reduced or prevented when a host like Cecropia better mutualists help create better rewards. An ant-protected plant can divert more resources to feeding its tenants, so their work rewards itself. However, Pseudocabima caterpillars are glad to take the lower level of rewards that Cecropia plants offer up to all comers.

In other words, if you’re going to give out free lunches, you can’t really expect everyone who eats to pay you back.