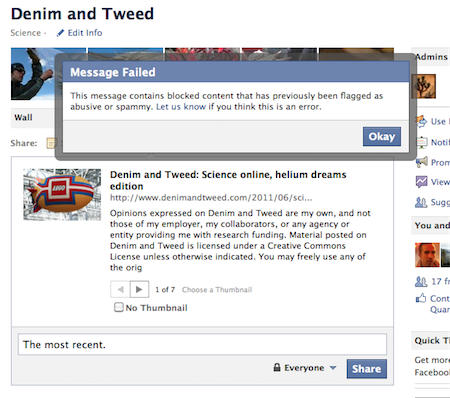 Just found the following in my inbox:

This morning I noticed the Lego-Blimp post and decided some of my Facebook family would be amused. I found the post ‘blocked’ by FB, presumably because of the ‘gay’ content. Bleh. I filled out the ‘why this content should not be blocked’ form but lard knows what will happen. In anycase I’ll keep trying to link to your site.

(Hyperlink added for context, otherwise sic.) I’ve just tried to post a few links from D&T myself to the D&T Facebook page (in a separate issue, the widget I use to automatically send new posts to that page had broken) and it seems as though today’s linkfest (but only that) has indeed been blocked as “abusive.” What the deuce?

I’ve filed an appeal, as did the reader who initially found the problem, but I’m not sure what else to do. Has anyone else run across this? What more can I do?

And for the record, if whoever flagged that post and/or this blog as “abusive” is reading, no one is forcing you to read Denim and Tweed, much less follow it on Facebook.