Which came first, the pollinator or the pollinated? An article in this week’s Science suggests that a diverse group of insects may have been drinking nectar and pollinating plants millions of years before the appearance of modern flowering plants [$-a]. 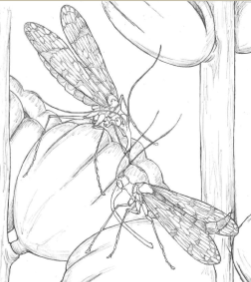 Panorpis communis, a modern scorpionfly species, and a sketch of ancient, pollinating scorpionflies. Photo by JR Guillaumin; sketch from Ollerton and Coulthard (2009).

Prior to the origins of modern flowering plants, or angiosperms, in the early-middle Cretaceous period, most of the diversity of land plants were gymnosperms. These plants are characterized by “naked seeds” — reproductive organs exposed to the air, where the wind can catch pollen and carry it from one plant to fertilize the ovules of another. In a world dominated by gymnosperms, the thinking used to be, animal pollinators were mostly unnecessary.

The new paper by Ren et al. challenges this idea with the description of a set of fossilized scorpionflies, all of which have strikingly long probosces that are clearly suited to sucking up liquid. The earliest of these fossils are from the Jurassic, tens of millions of years before the flowering plants began to diversify. In modern insects, sucking mouthparts like the ones described are associated with two kinds of feeding: drinking pollen, and drinking blood. To determine which was most likely in this case, Ren et al. performed energy-dispersive spectroscopy on the best-preserved fossil, and found no sign of the elevated levels of iron in the proboscis that would result from the residue of blood meals. This suggests that the scorpionflies were drinking nectar, or something like it.

Nectar has one major function in plants: to attract insects. Ant-protected plants reward their ants with nectar, and flowering plants use nectar to lure animal pollinators close enough to pick up or drop off pollen. If these ancient scorpionflies were, in fact, living on nectar, Ren et al. reason they were probably pollinating contemporary plants, which were all gymnosperms. The authors identify a diverse list of candidate host plants, including seed ferns and a relative of the modern ginkgo, whose reproductive structures were (1) too well-sheltered for efficient wind pollination or (2) included tubular structures similar to those that modern plants use to guide nectar-feeding pollinators. Finally, the authors point out, many modern gymnosperms produce “ovular secretions” that are very similar to the nectar produced by angiosperms.

As a neontologist, I’m often amazed how much can be told from million-years-old fossils — who knew there was a way to test for residual blood in a fossilized proboscis? At the same time, Ren et al. connect some mighty scattered dots to build their hypothesis. The real clincher is that it seems mighty unlikely that animal pollination would be rare in a world that already has both flying insects and pollen-producing plants. Animal pollination is much more efficient than wind pollination, and if there’s one constant in evolutionary history, it’s that living things rarely miss an opportunity like that.