The future is in the cloud? Photo by Extra Medium.

Biologists are about to have access to all the genetic data we could ever want. Unfortunately, once we have that data, we have to figure out where to put it—and some way to sift out the bits that answer the questions we want to answer.

That’s the first day of the NESCent workshop in next-generation sequencing methods in a nutshell.

Brian O’Connor, who gave the morning lectures, framed the immediate future of biology as a race between technologies for collecting genetic sequence data and technologies for storing and analyzing that data. Moore’s Law is that computer processor speed (really, the number of transistors packed into a single processor chip) doubles about every two years; Kryder’s Law is that computer storage capacity roughly quadruples in the same amount of time. But in the last few years, and for the foreseeable future, DNA sequence collection capacities are growing on the order of ten times every couple years.

In other words, there may very well come a day when the cost of storing and using a genome (or genomes!) belonging your favorite study organism will exceed the cost of obtaining those data.

O’Connor suggests that one major way to stave off the point where computing capacity limits data collection and analysis will be to use more “cloud” systems—remote servers and storage. Lots of institutions have their own servers and computing clusters. I’m already working with data sets too big to carry, much less process, on my laptop; I filter out the subset of sites I want on the server where the data is stored, and download (some) of that smaller data set for local work.

In the afternoon, we got started with one such alternative, Amazon EC2, or “elastic cloud computing.” Yes, that’s Amazon as in Amazon.com, the place where you buy used textbooks. It’s possible to rent processing capacity and storage from Amazon, and the services are provided in such a way that when you need more, you can just request it. “Instances” running on Amazon’s computing facilities can run Unix or Windows—you can interact with an instance via a remote desktop-type interface such as NoMachine’s NX system—and will run any program you’d care to have chew its way through your data.

All of this, of course, assumes you have the budget. It’s not clear to me how easy it’d be to estimate computing needs ahead of time for grant-writing purposes; but on the other hand, you can probably expect that whatever estimate you come up with will likely go that much further when you finally start working a year later. Over beer at the end of the day, Karen Cranston, the Informatics Project Manager for NESCent, told me that Amazon’s pricing is close enough to that of the high-capacity computing facility at Duke University that it’s often worthwhile to use EC2 for short-term, high-volume projects simply because it’s so quick and easy to bring new resources to bear.

As a not-yet faculty member, the cloud means I can plan to do genome-scale work even if I end up at an institution without the on-campus resources to build its own cluster. That’s potentially pretty liberating. ◼

As one of the recipients of the Science Online travel awards, I spent Friday morning, and lunch, visiting National Evolutionary Synthesis Center. NESCent is an NSF-funded space where postdoctoral fellows and faculty members on sabbatical are put together with an unlimited supply of coffee to apply new analyses to (mostly) existing datasets, often in collaboration with researchers at Duke University, the University of North Carolina, or North Carolina State University, the three institutions administering the center.

In three and a half hours, I met with (in no particular order) Craig McClain, Robin Smith, Carlos Botero, Julie Meachen-Samuels, Ben Redelings, Trina Roberts, Juan Santos, and Gregor Yanega – it was extremely stimulating, and a little dizzying. (The other travel award winner, Christie Wilcox, arrived later in the morning, straight off her multi-connection flight from Hawaii, but she held up remarkably well.) The visit wrapped up with lunch at a nice cafe across the street from the NESCent offices, and then it was off to the lemurs with me. I can’t think of a better way to start the conference than a morning packed full of smart people doing interesting science. 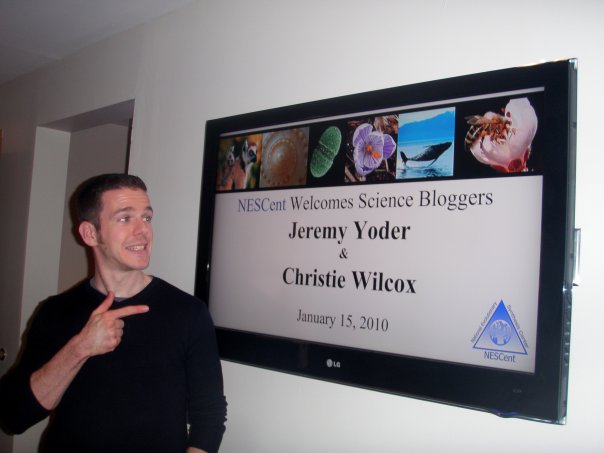