Biologists interested in the origins of species diversity frequently focus on the phenomenon of adaptive radiation, the process by which a single species rapidly gives rise to many new species, each with different traits adapted to different lifestyles. Darwin’s finches, with their beaks shaped to suit to different foods [$a], are a classic case; the Anolis lizards of the Caribbean, which have repeatedly evolved into a handful of “ecomorphs” with different body sizes and shapes adapted to different perching locations [PDF], are another. The two most influential theories of adaptive radiation—by G.G. Simpson and Dolph Schluter—have suggested that it results when a species encounters ecological opportunity. Ecological opportunity might be a newly-evolved trait, or a new habitat, or the extinction of a species’ competitors or predators. For instance, a butterfly might evolve a way to overcome the chemical defenses of an abundant plant species, or a plant introduced by humans to a new habitat might find that local pathogens aren’t as deadly to it as the ones in its native range. Ecological opportunities have the effect of granting access to new resources. We have pretty good evidence that this can allow individual populations to increase in number, and even evolve greater diversity—but is that enough to spur the rapid speciation that forms adaptive radiation? 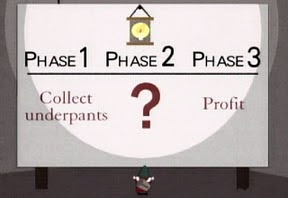 We’re pretty sure about steps 1 and 3. We’re still trying to figure out step 2.

Readers in certain demographic groups may think this sounds like an underpants gnome problem. But it isn’t, exactly. The gnomes’ business model can’t get to from step 1 (collect underpants) to step 3 (profit) because they don’t have a step 2. Evolutionary ecologists, on the other hand, already have their step 3 in the phenomenon of adaptive radiation. Ecological opportunity looks like a good prospect for step 1 precisely because it suggests some plausible options for step 2.

When a population encounters ecological opportunity, the new habitat, new trait, or extinction of antagonists provides access to new resources, and relaxes natural selection on the population. This leads to three phenomena usually grouped together under the term ecological release

One or more of these three aspects of ecological release turn up whenever populations find new food resources, or escape predators and/or competitors. Density compensation has been widely observed in populations colonizing new habitats, especially islands; and experiments with sticklebacks and fruit flies [$a] suggest that the stronger competition resulting from density compensation can spur the population to become more diverse in its use of resources. Bacterial populations can even evolve different specialized forms—adaptive radiations in microcosm—when introduced to new food resources. 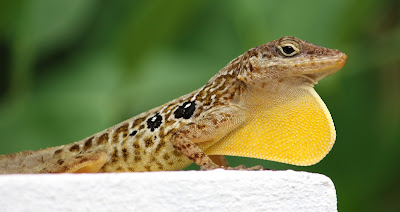 Anoles show signs of density compensation on Caribbean islands—is that the reason behind their diversification? (Pictured: Anolis oculatus.) Photo via WikiMedia Commons

But where’s the speciation?

However, the evolution of bigger, more diverse populations is not the same thing as the evolution of new species—and that’s what adaptive radiation is really all about. These changes resulting from ecological opportunity might directly promote speciation if stronger competition leads to disruptive natural selection. Similarly, the competition-driven incentive to colonize new habitats or exploit new food sources could expose some parts of the population to different forms of natural selection, eventually causing them to evolve into specialists on the new resources. Finally, even if speciation only happens when natural barriers cut off migration, maybe larger, more variable populations provide more diversity for vicariance events to divvy up.

This is all pretty speculative, though. We still don’t know how often—or how rarely—divergent natural selection contributes to making new species. One way to deal with this is to approach the question from the other direction: look backward at the history of existing species, rather than following what happens to populations immediately after ecological release.

A backward-looking approach might use statistical analyses of the evolutionary relationships between living things to identify points in time when species formed unusually fast, and try to identify the cause. Some of my coauthors from the review paper recently published an analysis of the evolutionary tree connecting all vertebrates, and found that speciation rates increased around the origins of the largest group of birds, a large portion of the lizards and snakes, and non-marsupial mammals, among others.

This is very much a starting point, but maybe by complementing similar studies with research on populations currently evolving in response to ecological opportunity, biologists can work our way closer to understanding the origins of the endless and beautiful forms of life on Earth.

Update, 19 July 2011: More than a year after this study was published, some important objections have been made about very basic assumptions of the experiment presented. Also, I’ve fixed the first link the original article.

There’s something special about islands. After moving to islands, plants adapted to rocky outcrops evolve to grow in rainforests and alpine meadows, and finches evolve to behave like woodpeckers. But why? Islands contain new food sources and habitats, they often lack predators, and they can provide more geographic barriers to generate reproductive isolation—to name just a few possibilities. A newly published ecological experiment now provides evidence that one group of island lizards diversfied because islands are crowded [$a]. There’s something about islands. Photo by Storm Crypt.

How could that difference in selective regimes spur diversification? Imagine two towns, one surrounded by other settlements, the other on its own in the middle of the wilderness. The town in densely-populated country is probably best off doing one thing well—to have, say, most of its inhabitants working at a factory making (to pick a product at random) sausages for trade with other towns. People living in this first town might want to start up a factory making a different product, but odds are good there’s strong competition from another town nearby, so it’s hard to get the new business off the ground—it’s really just better to invest in the existing factory.

On the other hand, the inhabitants of the town in a lightly-populated district might need more products made locally because it costs too much to import. A businesswoman in the isolated town is probably better off starting a factory that makes a product no-one is making locally—if sausages are already accounted for, there might be a market for (to pick another product at random) pharmeceuticals.

The density compensation hypothesis proposes that something similar happens on islands. With fewer predators or competitor species, island populations are able to maintain higher densities of individuals. That increased density means that competition within the species becomse stronger, creating natural selection that favors individuals who can use new food resources or live in new habitats.

Density compensation seems likely to be responsible for the diversification of anole lizards on the islands of the Caribbean. In the course of colonizing Caribbean islands, anoles have repeatedly evolved into a handful of different niche specialists [PDF] called “ecomorphs,” ranging from “giant” species that live high in the forest canopy, to small species that can navigate and perch on fine twigs, and intermediate species that live on and around tree trunks. Anoles on the mainland of Central America are no less diverse than their Caribbean congeners, but they haven’t evolved mini-radiations of replicated ecomorphs—and their population densities are much lower than those of the island species.

If release from predators, and the ensuing increase in population density, drove the diversification of island anoles, then we might expect that natural selection from predators has less effect on the traits that differentiate the anole ecomorphs than natural selection from other anoles. Testing that hypothesis experimentally is ambitious to say the least, but that’s what the new study attempts to do.

The authors, Calsbeek and Cox, identified six very small, similar islands off the coast of the Bahamian island Greater Exuma, and introduced varying numbers of brown anoles (Anolis sagrei) onto them at the beginning of the summer. The islands were small enough that Calsbeek and Cox could selectively exclude birds by enclosing the islands in netting; by introducing predatory snakes onto some islands, they could then generate three selective regimes: no predators, birds only, and birds plus snakes. Before introducing them into these experimental setups, the authors measured each anole’s body size, hind-leg length, and running stamina, and marked each lizard so they could estimate selection acting on the three traits based on which lizards survived to be recaptured at the end of the season. (The experiments were carried out over two years, with both years’ results compiled at the end.)

The results suggest that competition makes a bigger difference for the experimental populations than predation—while the strength of natural selection acting on all three traits increased with the anoles’ population density, it didn’t change when predators were allowed access to the islands. If the levels of predation simulated on the micro-islands accurately reflect what anoles experience throughout the Caribbean, then the result is, I’d say, pretty good evidence that competition is the most important evolutionary force acting on island anoles.

I should note that, although Calsbeek and Cox’s raw result is suggestive, it’s not clear that their sample size is big enough to support all the statistical analyses they perform on the data. On balance, I think they deserve a lot of credit just for tackling this question experimentally.