Are you sure you want to be getting all uncritically book-endorse-y with Jesse Bering? I mean, yes, Bering’s a snappy writer with a nose for edgy topics, and the bit you excerpted—concerning the good ol’ “plunger penis” hypothesis [$]—is intriguing.

I mean, I don’t want to be making an ad-hominem argument here, but I tend to think that the point of popular science writing is for the audience to benefit from a writer’s perspective and expert judgement. And Jesse Bering’s judgement is in pretty serious question. (Don’t just take my word for it!) He might very well be a great psychologist—that field is beyond my expertise to assess—but it’s pretty clear that Bering’s knowledge of evolution begins and ends with an exceptionally superficial understanding of natural selection, and, more often than not, he rallies that superficial understanding (but not much actual scientific evidence) for the defense of some pretty damn’ regressive ideas.

Plus which, “plunger penis” isn’t exactly news: the paper Bering seems to be citing is from 2003, and Jared Diamond discussed the ways in which the human penis stands out (heh) in comparison to those of other apes in The Third Chimpanzee, which was first published in 1992. Wasn’t this covered in Sex at Dawn?

All I’m saying is, read that new book with a saltshaker handy.◼

It is mean and insulting and completely outside of the realm of polite behavior to ask that fundamentalist Christians explain why the “plain text” of the book they use to justify treating queer people as second-class citizens is different from the plain text of the same book that enthusiastically endorses slavery, genocide, and apalling mistreatment of women.

Especially when, as Dan Savage did, you have the nerve to call that hateful interpretive double-standard “bullshit.”

Dan’s apologized exactly to the extent he ought (which isn’t much) and come out with guns a-blazing against the fundamentalist fish in the theological barrel that is modern “Biblical literalism.”

Of course, the point of all this is not that it was rude for him to use the word “bullshit,” or even to describe those poor, defenseless Christian teenagers who walked out rather than engage with a perfectly legitimate theological question as “pansy-assed.” It was rude of Dan to confront those kids—and, now, the universe of fundamentalist offense-addicts who are giving him their undivided attention—with the fact that no matter what they claim, their “literalism” is a tangled mess of specific interpretive decisions that have nothing to do with the “plain text” of the Bible. It’s never been about adhering to the superficial meaning of the King James (or any other) text; it’s about putting their own mean little prejudices in the mouth of an unassailable, inaccessible, invisible Creator.

Almost immediately updated to add of course Fred Clark and John Shore are all over this. 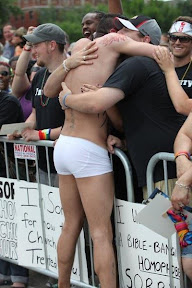 So, lately there’s been a story percolating through the gay and gay-friendly blogosphere, about a church that went to Chicago Pride to apologize:

I spent the day at Chicago’s Pride Parade. Some friends and I, with The Marin Foundation, wore shirts with “I’m Sorry” written on it. We had signs that said, “I’m sorry that Christians judge you,” “I’m sorry the way churches have treated you,” “I used to be a bible-banging homophobe, sorry.” We wanted to be an alternative Christian voice from the protestors that were there speaking hate into megaphones.

There’s even this photo of a guy in short shorts, so overcome with emotion at this “alternative Christian voice” that he stepped out of the parade for a hug. It sounds beautiful—as they say, almost too good to be true.

Regrettably, that’s because it is too good to be true.

The story’s not new—I first ran across it, complete with that photo, back in 2010, when Dan Savage posted about it. Dan said it made him “tear up” … and then he learned that things were not as they seemed. The group mentioned in the story, the Marin Foundation, has a history of taking this apologetic stance—but they’re not apologizing for saying that being gay is sinful. They’re just sorry that other fundamentalists have been a bit rude about the whole going-to-Hell-for-loving-who-you-love thing. The fellow behind the foundation, Andrew Marin, has a history of self-promoting bullshit going back at least to 2006, and he’s right at home with the fundamentalist bigots when it suits him to be.

It doesn’t matter how polite you are when you say it—the position that same-sex relationships are inherently sinful, that gays and lesbians are somehow undermine the “sanctity” of other people’s relationships by loving the people we do, is inherently and inexcusably hateful. It’s the root of the more overt bullying and hatred that the Marin Foundation is ostensibly repenting for. There are lots of Christians who have truly repented and repudiate fundamentalist homophobia, and all of them acknowledge this link: Fred Clark and John Shore are two sterling examples; or see the religious groups who are rallying against Minnesota’s proposed constitutional ban on marriage equality.

I can certainly understand why the Marin Foundation story keeps popping up; it’s a poignant one, and it’s one we’d like to see happen for real. And stories like it are happening for real, all the time and all over the country. But Marin’s flashy, two-faced stunt at Chicago Pride distracts from quieter stories of real repentance, love, and acceptance. ◼ I’m super late to this one, but … holy blithering wow, man.

Dan Savage—nationally syndicated advice columnist, It Gets Better co-founder, serial contributor to This American Life, and all around alpha-gay—was on the Colbert Report to discuss the recent New York Times profile about his views on monogamy, which views may be briefly summed up as why ruin a perfectly good marriage by insisting on complete sexual fidelity? And about midway through said interview, Savage drops a line which, while requiring no censorious bleeping whatsoever, stops Colbert dead in his metaphorical and satirical tracks and had me just about on the floor in laughter and/or amazement. I’m frankly still a mite breathless, and in full-on Wallace-esque run-on mode as a result.

And, well, you probably don’t want to see it if you’re not particularly cool with Savage’s aforementioned feelings about monogamy, but if you are in fact generally on board or at least don’t get the howling fantods after reading my summary or obliquely contemplating what I shall delicately call the mechanics of love, and if you are even later to this than I am* you really ought to right now.

All of which is a rather long way to go to say, gods (or whoever) bless Dan Savage and Stephen Colbert.

————–
*Which probably means you didn’t have an internet connection till this evening, in which case let me take this footnote to say, welcome to the World Wide Web!

Savage Car Talk mashes up the Magliozzi Brothers’ Public Radio automotive advice show with questions submitted to Dan Savage’s no-holds-barred sex and relationship advice podcast. The result is not suitable for work, unless you work in an automotive-themed gay bar.

This makes total sense. Dan takes a pretty left-brained, mechanistic approach to the relationship problems brought before him. Click and Clack talk about relationships almost as much as they discuss cars. Many times, I’ve run across relationship and automotive problems of my own that seemed like they would be worthy of a phone call to the appropriate show—only to realize I already knew the answer thanks to long hours of listening to advice given to other people.

Also, I’ve heard that almost a third of Dan’s misanthropic snark is added in post-production.