Consider a population of guppies living in the Aripo River in Trinidad. They have a happy existence, as far as guppies can be happy, but their lives are shaped by the constant threat of larger, predatory fish. The river runs clear over a colorful gravel bed, and guppies who stand out against that background are eaten quickly. Even guppies whose coloration helps them blend in have to be ready to make a break for it if a predator shows up. All in all, a guppy’s chances of surviving to mate depends most on its ability to hide from bigger fish, and to swim quickly when it can’t hide.

Then one fine day a biologist comes along, scoops up a couple hundred guppies, and moves them to a pool in a tributary of the river. The pool is separated from the mainstream by a series of waterfalls, so larger fish can’t swim up—the guppies are now free from their most dangerous predators. They can be fruitful and multiply. In this new habitat, camouflage and evasive maneuvers don’t matter so much. What does matter is finding enough food to make some babies in the midst of a whole bunch of other guppies who are also not particularly worried about predators.

John Endler started the experiment I’ve just described back in 1976 to see whether guppies’ coloration helps them hide from predators [PDF]. The guppies he moved to a predator-free stream have continued to evolve, though, and three decades later, new studies are showing how release from predators changed the guppies—and how those changed guppies could be changing the living community around them.

Since the 1976 introduction, Endler and other biologists have tracked the Aripo River guppies’ response to the change in natural selection he created. Release from predators is considered one of the classic sources of ecological opportunity that can free a population to evolve new traits and behaviors, and explore new ways of making a living. At the same time, a sudden lack of predators means that competition within the population can become stronger. 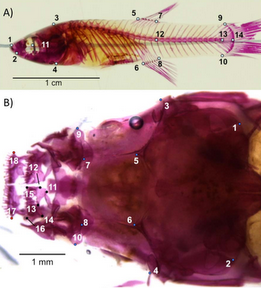 Points of measurement for guppy body and head shape, illustrated on a stained specimen. Image from Palkovacs et al, fig. 1.

In one study just published by PLoS ONE, Eric Palkovacs and two colleagues compared the body shape of guppies from the experimental population with guppies from the source stream. (Endler had noted changes in body shape along with changes in coloration in his original paper.) First, Palkovacs and his coauthors gauged how rapidly female guppies taken from each site snapped up standardized food. Then they killed the test fish, treated them with stain, and measured their body and head shape. Fish from the site with lower predation ate faster, and they had bigger mouths and deeper bodies than fish from the site with more predators.

Palkovacs and his coauthors also observed that the guppy populations at the experimental site were denser—without predators thinning them out, the fish are probably most limited by their food supply. A study published last year in PNAS suggests that this denser guppy population might reshape its own environment. The paper’s authors created artificial ponds stocked with algae and small invertebrates, then introduced guppies from the high-predation source site or from the low-predation experimental site. They also controlled for the differences in guppy population density associated with predator pressure, maintaining the fish at either the high density observed with low predation, or the lower density observed with high predation.

These results echo a study I discussed last year, which used a very similar approach to show that speciating sticklebacks can change their environment. It’s another reminder that evolutionary change can feed back to change the environmental conditions that prompted change in the first place—that natural selection operates in the midst of continuous change.

There’s already been a lot of blogospheric discussion of the BBC’s recent declaration that “Darwin may have been wrong” based on a recently-published paleontology paper. I hadn’t paid it much attention, because while sloppy science journalism irritates me, it’s not quite in my wheelhouse, expertise-wise. Then I actually got around to reading the paper, and it turns out that it’s directly related to some of my own work—and the conclusion that led to the sensationalistic sub-headline doesn’t make any sense.

Coauthors Sahney, Benton, and Ferry analyze the fossil record of four-limbed vertebrates—tetrapods—to show that in general, as more species evolve, they also evolve to fill a wider variety of ecological roles [$a]. Ecological roles are here defined by combinations of body size, diet, and habitat. (Sahney et al estimate there are 207 such combinations possible, though only 75 are “occupied.”) That’s a straightforward and mostly unsurprising result—the number of tetrapod species increases as tetrapods evolve new ways to make a living. But then we get to the conclusions of the paper, and things get weird.

Except that the very reason species diversify following an ecological opportunity like the development of a new ecological role is the lack of competition the new role provides. As my coauthors and I documented in a recently published literature review, competition shapes the kind of diversification documented by Sahney et al. in two ways: first, by its absence following the evolution of a new lifestyle; then in spurring an adaptive radiation as new species evolve to partition up the newly-available “ecospace.”

What makes this doubly odd is that Sahney et al. refer to another kind of ecological opportunity, the extinction of competitors, as a good example of competition-driven diversification. But a central insight of the literature on ecological opportunity is that diversifying because a whole bunch of ecological roles have just opened up is not fundamentally different from diversifying after a new mutation makes a never-before-seen ecological role possible. Think of it like starting a new business: to avoid competition, you could either sell an existing product in a place where no one else sells that product, or you can invent a product no one else offers. Both approaches give you a market all to yourself, and both are defined by competition.

It’s hard for me to understand why Sahney et al. don’t make this conceptual connection—which, for what it’s worth, has its roots in The Origin of Species.

Over evolutionary time, the easiest way to deal with a competitor is to do something different – if your competitor eats big seeds, say, it may be easier to start eating small seeds than to fight for the big ones. This idea goes all back to the Origin, wherein Darwin proposed that competition drives evolutionary diversification, with living things dividing up available resources into ever-finer slices as they scramble for shares:

Lighten any check, mitigate the destruction [of offspring] ever so little, and the number of the species will almost instantaneously increase to any amount. The face of Nature may be compared to a yielding surface, with ten thousand sharp wedges packed close together and driven inwards by incessant blows, sometimes one wedge being struck, and then another with greater force.

But what if competition can sometimes make competitors more like each other? A new study, published through PLoS ONE this week, shows that red-backed shrikes prefer to set up hunting territories in places where their competitors have already been hunting. Shrikes are cute but vicious predators – they capture small prey and spear them on thorns or twigs for storage, or to indicate to a prospective mate what great hunters they are. Red-backed shrikes migrate from Africa to Eastern Europe for the summer mating season. When they arrive, male red-backed shrikes must establish a hunting territory with a nesting site, but they have to contend with the established territories of great gray shrikes, which live in the same area year-round, and eat the same kind of prey.

Still, this observation has significant implications for the way we think about species interactions across evolutionary time. If competitors can be drawn together as well as driven apart, maybe competition doesn’t contribute to diversification as much as we think it does.