For all living things, information is critical to survival. Where’s the best food source? Is there a predator nearby? Will this be a good place to build a nest? It probably shouldn’t be surprising, then, that lots of animals do what humans do when faced with a host of hard-to-answer questions—they take their cues from their neighbors.

Red-backed shrikes place their nesting sites near where other shrike species have set up territories. Many bird species recognize each other’s predator alarm calls, and respond appropriately. And a new natural history discovery published in the latest issue of The American Naturalist shows that treehoppers let one species of butterfly know where to find ants that will tend its larvae [$a]. 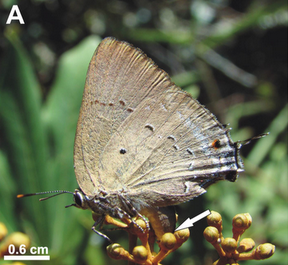 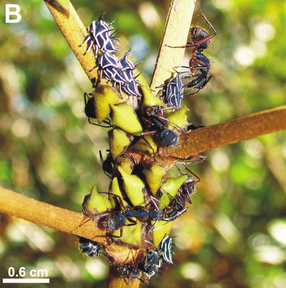 The ant-tended butterfly (Parrhasius polibetes, above) looks for ant-tended treehoppers (Guayaquila xiphias, below) to know where to lay her eggs. Photos from Kaminski et al. (2010), figure 2.

The treehoppers help out the butterfly inadvertently, because both of them are dependent on a common resource: ants. Like many true bugs, treehoppers make their living sucking the sap of a host plant. This gives them a surplus of simple sugars and water, which they excrete as “honeydew” to attract ants for protection. As it happens, the larvae of the butterfly Parrhasius polibetes do the same thing—so the new study’s authors hypothesized that P. polibetes females might prefer to lay their eggs on plants where treehoppers were already present, since those would likely already have ants ready to protect butterfly larvae.

To test this, the authors set up experimental pairs of host-plant branches, one occupied by ant-tended treehoppers, and one not. They excluded ants from accessing the unoccupied branch with Tanglefoot, a water-resistant glue used in insect traps. After 48 hours, they checked the experimental plants for newly-laid butterfly eggs, and found that P. polibetes was both more likely to lay eggs, and laid more eggs at a time, on branches occupied by treehoppers.

So it looks like P. polibetes is able to freeload on the treehoppers’ ant-attracting efforts, and benefits from that freeloading. What effect does that freeloading have on the treehoppers, or the ants, or the host plant? It’s hard to say based on the data presented in the current paper, but I’d guess that the treehoppers don’t lose much—in fact, they might gain from having another ant-attracting insect nearby, just as the butterfly larvae do. Similarly, it’s probably helpful for the ants to have more honeydew-producing species in the same location. It’s almost like that commercial for … what was the product?

(I’ll leave it to you, dear reader, to decide which insects correspond to which gendered pair in that video.)

I’d think, though, that this pile-on isn’t so good for the host plant, if plants already hosting treehoppers are more likely to have to deal with butterfly larvae, too. Untangling all the different ways these four species—ants, treehoppers, butterflies, host plants—exert direct and indirect natural selection on each other should keep the authors busy for a long time to come.