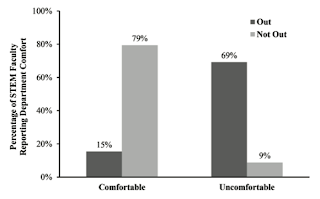 Faculty members who are out to their colleagues are … much more likely to describe themselves as “uncomfortable”? Figure 1 from Patridge et al. (2014).

Over at the Queer in STEM site, I discuss the first study to try and tackle the questions that motivated QiS, which was just recently published. It’s exciting to see that other folks are also looking at the experiences of LGBTQ folks in STEM careers—but it’s a bit puzzling that this new study found a pattern very different from what we see in our own data:

… of the STEM faculty who answered the Campus Pride survey, those who who rated their “outness” level as 4 or 5 were much more likely to say they were uncomfortable in their department.

… In the most comparable analysis from our own study, we found that participants who described their workplaces as “welcoming,” or said they were “treated the same” as their straight colleges, were much more likely to be out to their colleagues—exactly the opposite of the relationship Patridge et al. found between begin out and feeling comfortable.

In the full post, I discuss some hypotheses about why we might have found such completely different results, and try to evaluate them based on the Queer in STEM data.◼