My collaborator on the Queer in STEM project and I are flattered to be the subjects of an entire profile over at Autostraddle, part of the great series on “Queered Science” by Vivian Underhill, who also gave us a nice nod in an article for Bitch Magazine. The Autostraddle article gets into the genesis of the project:

Allison had done some work on queer issues previously, on “discrimination in school settings, transnational queer migration, and identity development.” So Jeremy asked Allison what she thought about the idea of a survey of a nation-wide sample of queer scientists – as a social scientist, did she think results like that would be publishable? “I responded, ‘are you asking me to teach you about doing research with human subjects? Sure!'”

There’s even an artist’s rendering of us hard at work in the field: 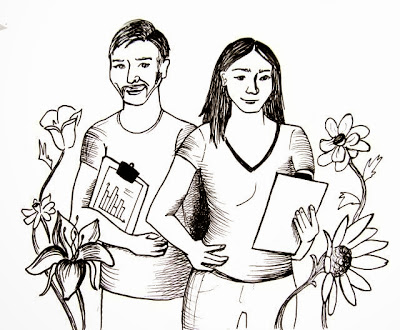 You should definitely go read the whole thing.◼