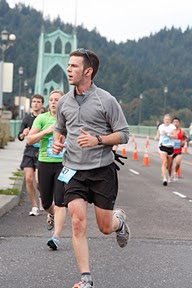 So, tomorrow’s the Mankato Marathon, which means I’m presently in a cheap hotel room in charming Mankato, Minnesota, winding down for an early bedtime in preparation to run 26.2 miles starting at 8 in the morning. Also, since I’m running to raise money for the campaign against an amendment to the Minnesota Constitution that would ban same-sex marriage, it’s also the home stretch for donations. D&T readers have already proven to be as generous as they are attractive and discerning, and given $350 so far — thanks! — which leaves just $150 to go to hit my goal. Update: As of 6 a.m. Sunday morning, you’ve hit $500 in donations! Many, many thanks!

So if you’ve already given (some of you, twice!) maybe pass on the donation link via your various social networks?

And if you want to track my progress tomorrow, you can look for bib number 529 on the results page; or keep an eye on my Twitter feed, in case I manage to live-tweet again. Now if you’ll excuse me, I have a race playlist to assemble.◼