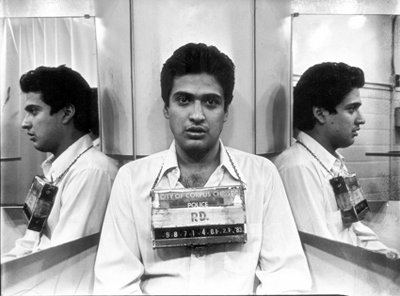 I’ve been trying to come up with something profound to say about this ever since I first saw it on Slog, but I don’t know what more to add to the statement: in 1989, the State of Texas executed Carlos DeLuna for a murder he very clearly didn’t commit.

The Columbia Human Rights Law Review has devoted an entire issue—available online, in completion, with exhaustively detailed supporting information—to an investigative report on DeLuna’s case. At the Guardian, Ed Pilkington picks out the most important details.

Carlos DeLuna was arrested, aged 20, on 4 February 1983 for the brutal murder of a young woman, Wanda Lopez. She had been stabbed once through the left breast with an 8in lock-blade buck knife which had cut an artery causing her to bleed to death.

From the moment of his arrest until the day of his death by lethal injection six years later, DeLuna consistently protested he was innocent. He went further – he said that though he hadn’t committed the murder, he knew who had. He even named the culprit: a notoriously violent criminal called Carlos Hernandez.

The two Carloses were not just namesakes – or tocayos in Spanish, as referenced in the title of the Columbia book. They were the same height and weight, and looked so alike that they were sometimes mistaken for twins. When Carlos Hernandez’s lawyer saw pictures of the two men, he confused one for the other, as did DeLuna’s sister Rose.

What happened was: Carlos DeLuna was unfortunate enough to witness Carlos Hernandez attacking Wanda Lopez, and ran off. The police found him near the crime scene, hiding under a truck, and almost immediately confirmed that he matched witness descriptions of Hernandez. Having a suspect, the police barely conducted any further investigation into the murder. More from Pilkington:

Detectives failed to carry out or bungled basic forensic procedures that might have revealed information about the killer. No blood samples were collected and tested for the culprit’s blood type.

Fingerprinting was so badly handled that no useable fingerprints were taken. None of the items found on the floor of the Shamrock – a cigarette stub, chewing gum, a button, comb and beer cans – were forensically examined for saliva or blood.

There was no scraping of the victim’s fingernails for traces of the attacker’s skin. When Liebman and his students [the authors of the investigative report] studied digitally enhanced copies of crime scene photographs, they were amazed to find the footprint from a man’s shoe imprinted in a pool of Lopez’s blood on the floor – yet no effort was made to measure it.

People interviewed for the investigation even confirmed that Hernandez repeatedly confessed to the murder. But it was Carlos DeLuna who was executed by lethal injection on the 8th of December, 1989.

The U.S. legal system is, at the most fundamental level, people. People can get things wrong. When the legal system is able to punish people by killing them, that means that the legal system can kill the wrong person. And now, if you need an example of someone who was wrongfully put to death in our country, you have a name: Carlos DeLuna, sacrificed to our society’s insistence that we should be able to punish death with death.◼