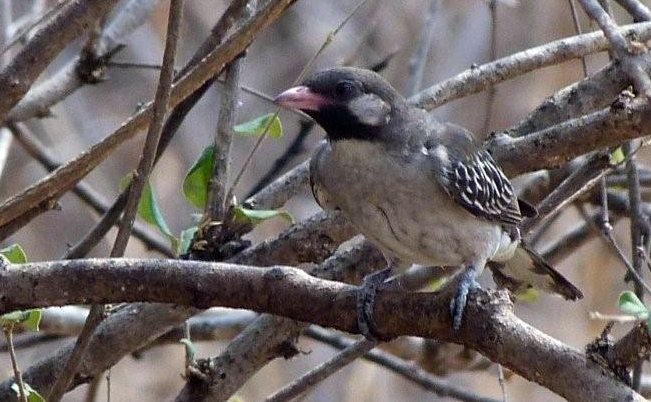 Brood parasitic birds lay their eggs in other birds’ nests, a lazy approach to parenting that shapes the behavior and evolution of brood parasites in all sorts of interesting ways.

Brood parasite chicks often kill their adoptive nestmates, and can grow up confused about their species identity. To better trick their hosts into accepting “donated” eggs, many brood parasites have evolved eggs that mimic the hosts’—and some hosts have evolved contrasting eggs in response. A recent genetic study now shows an even subtler pattern arising from this host-parasite coevolutionary chase: lines of parasitic females that have specialized on the same host species for millions of years.

The brood parasite in question is the greater honeyguide, an African bird best known for helping people find bee colonies (though the story that honeyguides also guide honey badgers don’t have much factual basis). However, honeyguide females also lay their eggs in the nests of several host species—including hoopoes, greater scimitarbills, green woodhoopoes, little bee-eaters, and striped kingfishers. Although the honeyguides’ eggs aren’t colored like their hosts’, they do have matching shapes—the hosts all nest in tree cavities, where lighting is too poor to notice a mis-colored egg, but an oversized or oddly shaped one would stand out. A hoopoe, one of the birds that “adopts” greater honeyguide eggs. Photo by Hiyashi Haka.

There’s an evolutionary catch, though: hoopoes, scimitarbills, and woodhoopoes lay oblong eggs, while the bee-eaters and kingfishers lay spherical eggs. Yet honeyguide females manage to lay eggs of matching shape and size in the nest of each host. Individual brood parasites can’t adjust the shapes of their eggs to match those in a host nest—they find hosts with eggs that will match their own.

How do they do it? Maybe each female honeyguide actually goes looking for nests like the one she grew up in, either because she is compelled to by some genetic instinct, or because she learns to recognize a potential host in the course of being raised by that host. Or maybe the host birds are so good at recognizing and rejecting oddly-shaped parasite eggs that only well-matched eggs make it to adulthood. Any of these processes could result in long lineages of female honeyguides laying eggs in the nests of the same host species their mothers, grandmothers, and great-grandmothers used. This is precisely the pattern Claire Spottiswoode and her coauthors found in the population genetics of greater honeyguides.

Spottiswoode et al. collected genetic data from honeyguides using all five of the host species mentioned above, and compared the patterns of relatedness from different genetic markers to patterns of host use. The pattern of differentiation in a marker from the mitochondrial genome—genes contained in the mitochondria, which mothers pass on to their offspring but fathers do not—neatly divides the honeyguides between hosts with oblong eggs and the hosts with spherical eggs. By applying a molecular clock to the mitochondrial data, the team found that the division between oblong-egg and spherical-egg honeyguides dates back as long as 3 million years ago. So honeyguide females have been tracking the same hosts, or very similar ones, for quite some time!

However, no such pattern is evident in four genetic markers from the nuclear genome, which is inherited via both parents. That suggests male honeyguides don’t discriminate among females based on host fidelity—mates pair off regardless of what host species they each grew up with. Spottiswoode et al. also note that this result hints at how honeyguide egg characteristics and host preferences could be inherited: via the female sex chromosome. In birds, biological sex is determined by the Z and W chromosomes—individuals with two Z chromosomes develop as males, and individuals with a Z and a W chromosome develop as females. Host preferences and egg shape inherited via the W chromosome would then be carried only by females.

However, the data presented here don’t directly test the W-chromosome hypothesis. That would require markers—or better yet complete sequence data—from the W chromosome itself, and (to be really thorough) lots more markers from the rest of the nuclear genome as well. That’s a lot of genetic data to collect, but we are very close to the day when such data are easily collectible. ◼