Natural selection does not necessarily love sex. Photo by xcode.

Sex is a puzzle to evolutionary biologists. I don’t mean that we’re socially awkward—I mean that sexual reproduction, which involves mixing your genes with someone else’s to produce one or more children, seems to be at odds with natural selection. Every child produced by sexual reproduction carries only half the genetic material of each of her parents; but parents who can make children without sex pass on all their genes to every child.

Over time, individuals who can make babies without sex should become more common in the population than individuals who have to have sex to reproduce, simply because every baby produced without sex “counts” twice as much for its parent. We know of cases (for instance, stick insects) where asexual reproduction has apparently evolved and spread multiple times.

And yet, not only is sexual reproduction widespread in the natural world, there are many species of living things in which some individuals reproduce sexually and some reproduce without sex, and the two types coexist more-or-less stably. This is particularly common in plants, but it’s also seen in lots of other taxa. That suggests there must be something useful about sexual reproduction that offsets the cost associated with making only half a copy of your genome for every child you have.

One popular hypothesis is that sexual reproduction helps generate new combinations of genes to fight parasites and diseases—this is called the Red Queen Hypothesis, after the character in Through the Looking-Glass who tells Alice that “… it takes all the running you can do, to keep in the same place.” Sex, the thinking goes, means that your children are more likely to have new parasite-fighting gene combinations, and that populations can “run faster” in the coevolutionary race against parasites. And now, a new study in a population of peculiar little fish provides some reasonably direct evidence [$a] for that proposed benefit of sex. 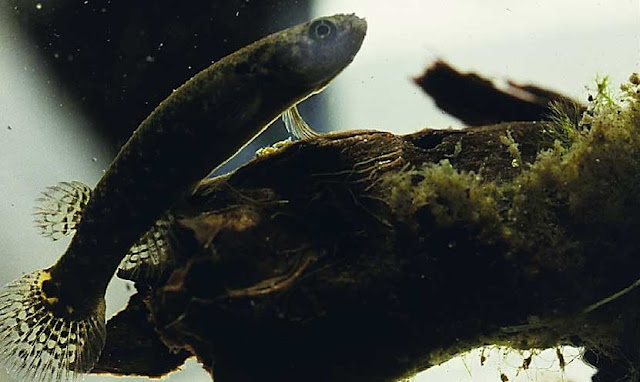 A mangrove killifish. Photo via USGS, used under fair use rationale.

The mangrove killifish, Rivulus marmoratus, leads a pretty remarkable life even before you consider its reproductive strategy. Mangrove killifish live in coastal mangrove swamps, where they must contend with changes in water salinity and water level—and they deal with dry spells by packing into hollows in mangrove tree trunks. Jammed together in a hollow log, the killifish can survive up to two months entirely out of water.

They’re also one of very few vertebrate species known to be able to reproduce asexually. Most mangrove killifish are hermaphrodites, capable of making both eggs and sperm and combining them—or “selfing”—to lay fertilized eggs. A few killifish develop as “pure” males instead, capable of producing only sperm, and therefore only capable of sexual reproduction. Why that small fraction of males persists in killifish populations is probably related to the selective costs and benefits of sex, both for mangrove killifish and for living things in general.

The Red Queen hypothesis predicts that sex is beneficial because it creates new combinations of genes, which in turn lead to greater parasite resistance. Therefore, if killifish produced by sexual reproduction should have more diverse genomes, and are better able to resist parasites than killifish who only have one hermaphroditic parent, then the Red Queen may be the reason why male killifish haven’t gone the way of the dodo.

This is what Amy Ellison and her coauthors found in a population of mangrove killifish from four sites in Belize. They collected killifish and took their genetic fingerprints to identify individuals that were most likely descended from a single selfing lineage, or those that carried genes from multiple lineages. They also checked each fish for infection by three major groups of parasites—bacteria, a common protozoan parasite of killifish, and parasitic worms.

Their total sample size is a bit small, but the team found a pattern generally quite consistent with the Red Queen. Fish descended from sexually-reproducing parents were more likely to be heterozygous—to carry two different forms of a gene—than fish descended from asexual lines. More importantly, fish descended from sexually-reproducing parents also generally had fewer parasites of all three classes, and were generally less likely to carry any protozoans or worms, than those descended from hermaphrodites. That’s consistent with the Red Queen, and it shows the perfectly good selective “reason” for a hermaphrodite to mate with a “pure” male—even though the hermaphrodite is giving up half the selective benefit of the offspring thus produced, those offspring are more likely to be healthy.

A broader prediction that follows from these results is that mangrove killifish populations with higher rates of parasite attack should have more males, or at least more individuals with two parents. What would really be cool, though, is if hermaphroditic killifish can respond to parasite infections by choosing to reproduce sexually—self-medicating, like monarch butterflies, but with sex instead of a toxic host plant. It’s been observed that the hermaphroditic nematode worm Caenorhabditis elegans responds to environmental stress by giving birth to more male offspring, but I know of no such result in a vertebrate. ◼