Tomatoes, one of many plants that play unwilling host to red spider mites. Photo by sylvar.

Plant-eating insects must overcome some of the cleverest weaponry in the living world—from poisonous latex to sticky hairs—just to find a meal or a place to lay eggs. Many deal with their host plants’ toxic defenses by digesting them or sequestering them safely for personal use, but the red spider mite Tetranychus evansi simply turns them off.

Tetranychus evansi eats a wide range of plants, from tomatoes to potatoes. One female mite can eat enough to lay 50%-70% of her weight in eggs every day, and while that isn’t much on the scale of a single, miniscule red mite, it adds up quickly when colonies build into dense clusters on host plants, sucking them dry and covering them in webs of spun silk.

Most host plants respond to such an onslaught by ramping up production of chemicals that make them unpalatable to herbivores, or that interfere with the mites’ ability to digest plant tissue. However, a team of Dutch and Brazilian biologists recently found that T. evansi somehow short-circuits this response [$a].

The team, whose senior author is the Dutch biologist Arne Jannsen, discovered that mites raised on leaf tissue from tomato plants previously attacked by T. evansi survived longer and laid more eggs than mites raised on tissue from plants that had never been attacked. Analsyis of RNA from tomato leaves attacked by the mites revealed that they were producing fewer of the signalling proteins associated with responding to insect damage than leaves damaged by another, related mite species—and one protein was produced at lower rates than in undamaged leaves! 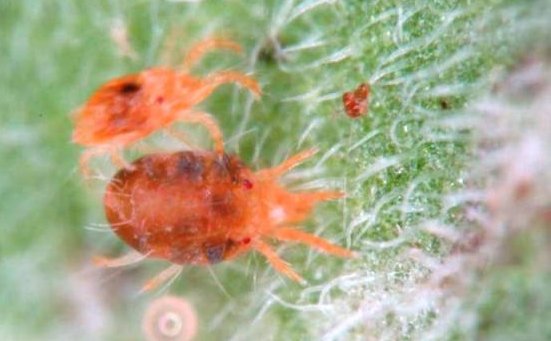 Mites, up close. Photo via AgroLink.

In other words, the mites were not just preventing the host plant from boosting its defences in response to a mite attack—they were suppressing the defenses below what they would be without an immediate threat. Like a burglar cutting the power to a home security system, T. evansi can somehow prompt a hostile host to become more hospitable.

This raises another problem, however. With its defenses down, the host plant is also more hospitable to other insect herbivores, which could reduce the plant’s value to T. evansi, or even activate the alarms the mites have managed to suppress. A second study by the same team suggests that this may be part of the function of the webs T. evansi spins as it consumes its host.

In this second round of experiments, the group returned to the closely related mite Tetranychus urticae, which was used to stimulate plant defenses in the first study. Earlier work had found that some strains of T. urticae can tolerate or suppress host plant defenses [$a], though not nearly as effectively as T. evansi. That earlier work found that non-suppressing mite strains could benefit from living on the same plant as a suppressing strain, and the new study first demonstrated that this effect is even stronger when T. urticae shares a plant with T. evansi. 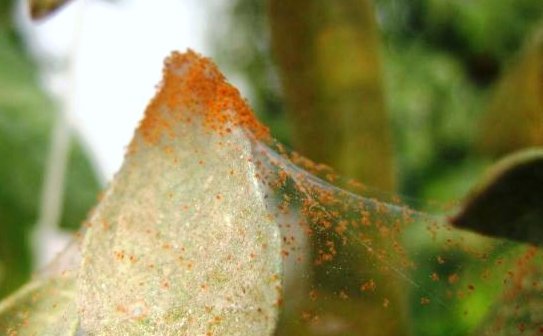 A whole lot of (presumably happy) mites. Photo via AgroLink.

In contrast, T. evansi colonies fared worse in the presence of the non-suppressing mites, whether fed leaves that had already been attacked by T. urticae, or placed on a mite-free leaf of a plant with another leaf infested by the non-suppressing species. All else being equal, T. urticae benefits from the defense-suppressing activity of T. evansi, but reduces the value of the host plant to T. evansi.

Faced with this freeloading competitor, T. evansi apparently replaces the disabled plant defenses with webbing. The team found that even though T. urticae thrived when given evansi-chewed tomato leaves, the non-suppressing mites had difficulty colonizing leaves covered in T. evansi webs. Moreover, T. evansi introduced onto a plant with the non-suppressing mites spun more webbing than when introduced onto a mite-free plant; but they didn’t ramp up web-spinning when sharing a plant with another colony of their own species, suggesting that the mites can respond to competition by building up their defenses.

So not only does T. evansi possess the means to turn off its hosts’ biological security system, it erects its own defenses to protect the plant from one competitor that might try to take advantage of the situation. How, exactly, the mites interfere with plants’ defensive responses will be an interesting future line of study. I’d also be very interested to see whether other herbivorous insects—things larger than other mites, and not so easily put off by some silk security fencing—also preferentially attack plants disabled by T. evansi. ◼