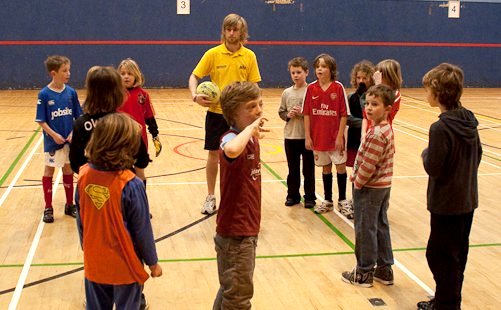 When you need partners for some sort of cooperative activity—say, teammates for a game of kickball—you’d probably like to have a choice among several candidates. That lets you weigh considerations about kicking strength and running speed—and who promised to give you his dessert at lunch period—to build a winning team. However, if the other team captain snaps up the good players first, the fact that you have a choice among the others might not make much difference.

Plants and animals looking for mutualists face a similar situation. Being able to choose among possible partners should allow the chooser to work with helpful partners and avoid unhelpful ones, but a new study suggests that in one widespread mutualism the process of choosing between partners can leave the chooser worse off than if it had no choice at all [$a].

Coauthors Erol Akçay and Ellen Simms focus on the effects of partner choice in the mutualism between plants and nitrogen-fixing bacteria—the interaction I’m studying in my current postdoc position, as it happens. All living things need nitrogen, but only some strains of bacteria are able to collect nitrogen from the atmosphere and “fix” it into a form that other organisms can use. Many plants, particularly members of the big and diverse bean family, have evolved to allow nitrogen-fixing bacteria to infect their roots—the plants form a nodule of root tissue around the infection and supply the tissue with sugar for the bacteria to feed on as they fix nitrogen. Eventually the nodule dries up and dies off, and the bacteria are freed into the soil, having multiplied many times over thanks to the food supply from the host plant.

A plant’s root nodules, some cut open to show the interior. Photo by pennstatelive.

To see how this choice might work in practice, Akçay and Simms construct a mathematical model of a plant with two nodules. Each nodule produces some level of nitrogen, and recieves some level of sugar from the plant. The plant negotiates with the two nodules in what’s called a “war of attrition” game: whichever partner wants a better deal cuts off the exchange of services, and holds out until the cost of losing the service it recieves is greater than the benefit it hopes to gain in the war of attrition.

Rather like ant-defended plants, plants that host nitrogen-fixing bacteria don’t seem to screen potential mutualistic bacteria before allowing them to infect their roots. However, after root nodules are established, the success of the mutualism from the perspective of both partners depends on the genetics of each [PDF], and when host plants receive supplemental nitrogen, they put fewer resources into growing nodules [PDF]. Host plants have been observed with different strains of bacteria in different nodules, and some nodules could contain diligent nitrogen fixers while others are full of freeloaders. This may be the point at which the plant has a choice of partners—it can potentially direct sugar to helpful nodules, and cut off unhelpful ones.

Because the plant has two nodules to choose from, it can potentially outlast an uncooperative nodule by relying on the other one. This works if the plant can shunt more resources to the cooperative nodule and recieve more nitrogen from it in return. However, the success of this strategy depends on two traits of the bacteria inhabiting the nodules—how readily they ramp up nitrogen production in response to more sugar, and how stubborn they are in the war of attrition game.

If both nodules are stubborn but responsive to extra sugar, the plant can negotiate with one nodule by giving the other more sugar and receiving extra nitrogen. This lets the plant hold out longer in the war of attrition. On the other hand, nodules that are not responsive to extra sugar but also not very stubborn yield quickly in the war of attrition even though they don’t help much in negotiations. In either of these two cases, the negotiations find an equilibrium in which the plant receives a benefit about intermediate between what it would recieve if both nodules were infected by the same strain of bacteria.

Just like humans haggling in a marketplace, the outcome of the interaction depends strongly on whether the other party plays along as expected.

Akçay and Simms find a way out of this trap by adding another wrinkle to the model. Much like the contract-theory models of mutualism I’ve discussed before, they modify the model to allow cooperative nodules to benefit from being cooperative. This makes a good deal of intuitive sense—if a nodule provides a better deal to the plant, the plant can potentially grow more leaves to produce more sugar, which would allow it to offer a better deal to the bacteria it hosts. Akçay and Simms call this “partner fidelity feedback,” and they find that, if it is sufficiently strong, it can allow the plant to out-negotiate a stubborn strain of bacteria.

Although it has a good deal of intuitive appeal, the model presented by Akçay and Simms does a fair bit of speculating in the absence of data. This is also a problem for the contract-theory model, and really all models of this widespread and important interaction. We know a great deal about the chemical details of plants’ interaction with nitrogen fixing bacteria. However, we don’t have a good sense of whether and how plants can redirect resources among nodules to haggle with the bacteria they host, and we don’t know whether and how bacteria could adjust their behavior to haggle with the plant. Akçay and Simms devote a big section of their online appendix [$a] to discussing just this point.

To figure out what’s going on inside those nodules, we need to determine how different models of interaction between plants and their bacterial mutualists may shape patterns in things that are easier to observe—both in the compatibility between plant genotypes and bacterial strains in greenhouse tests, and in the broader population genetics of both partners.