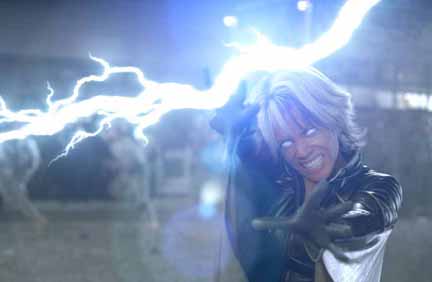 Beneficial mutations, according to Hollywood, include the superpowered ability to make San Francisco Bay foggy. Photo via Comics Contiuum.

Every time a cell divides is an opportunity for mutation, creating new genetic variation that may be beneficial, may be harmful, or may make no difference at all. In sexually reproducing species, the fate of a useful new mutation is relatively straightforward. If it overcomes the vicissitudes of genetic drift, the mutation will spread through the population as recombination swaps it into different genetic backgrounds, so that on average the mutation spreads or disappears on its own merits.

In asexual species, though, things are less straightforward. This is because new mutations are stuck with the genetic backgrounds in which they first appear—whether they spread of disappear depends not only on the fitness benefits they might provide, but on how beneficial the variation in the rest of the genome is, too. A new beneficial mutation in an asexual population is like a race car driver who can’t change cars—she might be an ace at the wheel, but if she’s stuck in a Yugo, she’s probably not going to win.

In other words, it’s a question best approached using experimental evolution. That brings us to a study just released in advance of print by the journal Genetics, in which a team headed by Greg Lang uses some clever methods to track the origin and fate of beneficial mutations in yeast.

The first clever thing about the project is that its authors knew in advance where to expect a beneficial mutation. Yeast cells reproduce both sexually and asexually—if the experimental populations are maintained in conditions that keep them reproducing asexually, mutations that turn off the costly cellular machinery necessary for sexual reproduction provide a measurable benefit. By using a strain of yeast engineered to produce fluorescent protein in the course of sexual reproduction, the authors could check for the presence of permanently asexual mutants by taking a sample from the population, prompting it to mate and measuring the sample’s total fluorescence. Lower fluorescence would mean that more cells had lost the ability to reproduce sexually; if samples from a population were to become less and less fluorescent over time, the beneficial mutation would be spreading through the population.

Lang and his coauthors then set up the kind of experiment that you can only do with single-celled critters: they started 592 populations of yeast evolve for 1,000 generations of asexual reproduction. Each population started out from a single genetic strain, so differences between populations started from the same strain were purely due to differences in the random processes of mutation and drift. (The full experimental design used two different strains of yeast, and kept the population size at either 100,000 or 1,000,000 cells, for a total of four treatments.)

You might expect that the loss-of-sex mutation would reliably emerge and spread until it dominated each replicate population. In fact, that only occurred in a small fraction of the replicates. In many more cases, the loss-of-sex mutation showed up and started to spread, but was then overwhelmed by yeast that could still reproduce sexually—presumably because other, more beneficial mutations had arisen elsewhere in the population. This phenomenon, clonal interference, is widely expected to happen in competition among clonal strains.

Without recombination to mix up the genome, a beneficial mutation is bound to genetic variants at many, many other loci that may boost the benefits from that mutation, or cancel them out. In a clonal population, each genome succeeds or fails as a unit—a single useful mutation simply cannot do it alone.