The common cuckoo is such a lazy parent that brood parasitism—laying its eggs in the nests of other birds—is built into its biology.

No bird will willingly adopt cuckoo chicks, which usually out-compete, and sometimes kill, their adoptive siblings. Given any hint that one of the eggs in her nest isn’t hers, a bird will eject the intruder. So cuckoos have evolved eggs that mimic the coloring of their hosts’ eggs—dividing the species into “host races” that specialize on a single host species, and lay eggs that mimic that host’s.

As you can see from this illustration, the match is often extremely good—the cuckoo egg is really only obvious when the hosts’ eggs are visibly smaller. In fact, a new study by Mary Caswell Stoddard and Martin Stevens shows that this matching is often even better than it looks to the human eye [$a].

Birds see the world differently than humans—where we have three kinds of color-sensitive cells in our eyes, they have four. This allows them to see colors in the ultraviolet range, which is invisible to us. Birds’ eyes also have an additional class of sensory cell that may help them perceive and discriminate among textures. So to study the match between cuckoo and host eggs, Stoddard and Stevens first had to figure out what each egg looked like to a bird. 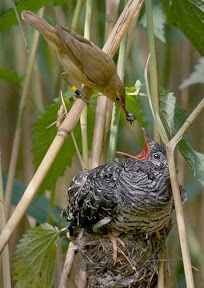 A reed warbler feeds the cuckoo chick that has taken over its nest. Photo via Wikimedia Commons.

To do this, they developed a mathematical model of each host species’ vision. The model estimated how similar two eggs should look to a bird, given raw data about what colors of light the eggs reflect and the specific colors the bird can detect. Using the model, Stoddard and Stevens could then calculate the “overlap” between the colors and patterning of a host egg and the egg of a cuckoo specializing on that host species.

Stoddard and Stevens then applied the vision model’s measure of similarity to museum specimens of eggs from the cuckoo-parasitized nests of eleven European bird species. They found that cuckoo eggs matched their hosts’ quite well overall, but the match was best for cuckoos specialized on especially vigilant hosts. For each host, the authors looked up studies of egg rejection behaviors to calculate the probability that each species would eject eggs that didn’t look like their own. Species with higher ejection probabilities were parasitized by cuckoo host races whose eggs were better mimics.

That suggests host rejection behavior exerts strong natural selection on cuckoos, which makes sense given that successfully fooling a host is essential to cuckoo reproduction. In light of evidence that cuckoos can also exert selection on their hosts, it looks as though brood parasitism is a truly coevolutionary interaction between cuckoos and their hosts—one that can cause both to evolve greater diversity.