Natural selection and gene flow have a sort of love-hate relationship. Natural selection acts, on average, to make a population better fit to its environment. Gene flow, the movement of individuals and their genes, can counter the optimizing effect of selection if it introduces less-fit individuals from somewhere a different environment. On the other hand, not all new immigrants are necessarily less fit—sometimes they’re better suited to their new environment than the locals.

This gets more complicated, and more interesting, when the environment in question is another living species. Then, the question is not just how movement of one species changes its response to natural selection, but how movement of the other species changes the nature of that natural selection. That’s the focus of the latest study of a Japanese weevil species and its favorite food plant. The two species are locked in a coevolutionary arms race—but who wins the arms race in any given location depends on the gene flow each species is receiving from elsewhere [$a]. 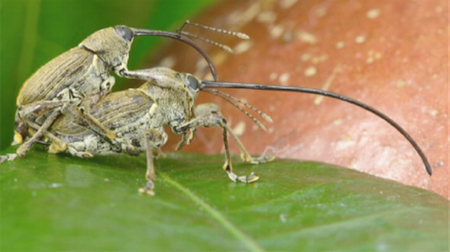 These are camelia weevils, Curculio camelliae. As their name suggests, they like to eat camelias, at least when they’re young. Specifically, weevil larvae eat camelia seeds, which are protected by a thick layer called a pericarp. To deal with camelia pericarps, the weevils have evolved prodigious proboscises, or rostrums, which female weevils use to drill through the pericarp so they can lay their eggs inside. Note that the female in the picture above is the one with the rostrum longer than the rest of her body.

Camelias can reduce their risk of losing seeds to weevil larvae by evolving thicker pericarps; weevils can make sure they’re able to feed their young by evolving longer rostrums. Both species are constrained by costs, though—the cost of producing more pericarp tissue, or carrying around a Pinocchio-grade snout. These costs vary somewhat with climate—camelias grow thinner pericarps in cooler conditions [$a]. This means the arms race won’t proceed equally far in all camelia populations, and introduces the possibility that the way in which weevils and camelias (well, camelia seeds and pollen) move across the landscape may very well determine which species has the upper hand. 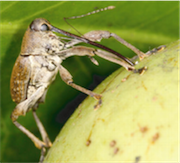 The new study sets out to see whether gene flow among populations of the two species determines how far the arms race proceeds in each population. Rather than directly track weevils and camelia seeds, the authors use genetic markers for each species—the more migrants move between two weevil (or camelia) populations, the more similar those two populations’ genetics will be. The populations in question were seven sites on a small island at the south end of the Japanese archipelago, and presumably relatively free from the influence of immigration from the larger islands.

It looks like the movement of weevils, but not camelias, affects how the arms race proceeds. As the genetic difference between weevils at two different sites increased, the difference in how far the arms race had proceeded—that is, how long the local rostrums were, and how thick the local pericarps—increased too. That suggests weevils may be prevented from evolving rostrums of the optimum length for their local camelias by the arrival of less-than-optimal migrants. On the other hand, there was no statistically significant relationship between the genetic similarity of camelia populations and their place in the arms race.

This is where the relationship between selection and gene flow gets complicated, though. Even given the relationship between weevil gene flow and how far the arms race seems to have proceeded, the genetic differences between weevil populations were consistent with very low actual rates of migration. A female weevil arriving in a population of camelias with pericarps too long for her rostrum isn’t going to contribute many offspring to the next generation of weevils at that site. So it’s not impossible that what we’re seeing is selection constricting gene flow rather than gene flow slowing down selection.

Alternatively, weevils from a population with super-long rostrums should be able to lay eggs in any population of camelias they meet. In fact, an analysis that uses the genetic data to estimate rates of immigration and emigration suggests that one of the weevil populations with the longest snouts contributes more migrants to the other sites than it receives from each of them. In arms-race coevolution, size is all that matters—and so the weevils with the longest snouts may be winners no matter where they go.