Over the last few months I’ve been writing a lot about how different species interactions have different evolutionary effects. The studies I’ve looked at so far focus on effects over just a few generations—barely time to take notice, in evolutionary time. The February issue of The American Naturalist remedies this short-term perspective with a paper showing that over millions of years, two different kinds of mutualists had very different effects on the history of one group of orchids [$a].

The new study examines the evolutionary history of coryciinae orchids, a group of South African orchids that rely on two major groups of mutualists. The first, and perhaps most obvious, are pollinating bees, which coryciinae orchids attract not with nectar but with oils. Like most other orichids, this group of flowers interacts with its pollinators in very specific ways, to the point that different coryciinae species can share a single pollinator by placing pollen on different parts of the pollinator’s body, as seen in the image below. 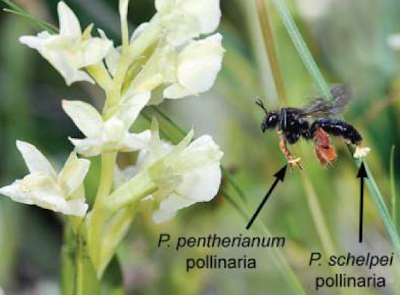 The second important group of mutualists are mycorrhizae, a class of fungus found in soil, which colonize plants’ roots. Mycorrhizae aid their hosts in taking up minerals, particularly phosphorus, in exchange for sugar supplied by the host. In certain kinds of soil, having the right mycorrhizae is the difference between life and death for a plant.

Although both pollinators and mycorrhizae are vital to an orchid’s success, they should contribute to forming new orchid species in very different ways. Evolving a new pollinator relationship can directly create reproductive isolation for a flowering plant, independent of other ecological considerations. On the other hand, mycorrhizae are closely linked to basic ecology, because the mycorrhizae in a plant’s roots determine what kinds of soils it can use—wet or dry, acidic or alkaline. If new orchid species usually form by adapting to new habitats, they probably acquire new mycorrhizae while doing so.

If changing a trait—in this case, a mutualistic relationship—is related to forming new species, then closely related orchid species will be more likely to differ in that trait. This turns out to be the case for pollinators—the more closely related two orchid species are, the more likely they are to use different pollinators, or different parts of the same pollinator. However, the reverse is true for mycorrhizae. The more closely related two orchids are to each other, the more likely they are to have the same mutualistic fungi in their roots. This finding that pollination matters most to species formation is right in keeping with Verne Grant’s classic study noting that animal pollinated plants tend to differ more in their floral structures—the parts that interact with pollinators—than in other traits.

The authors followed up on these results with field experiments on a few selected species, and found that co-occurring orchids could often successfully pollinate each other, if the pollen was deliberately placed. In these cases, differences in specialized pollination interactions are most of what maintains the orchid species as separate genetic entities. On the other hand, closely related orchids that grow in adjacent habitats did just fine when transplanted into each others’ soil—and mycorrhizae.

Biologists studying the effects of pollination on plant species formation have recently become more aware that correlation does not necessarily imply causation. New pollinator interactions certainly might form new species—but it is also possible that new orchid species created by other forces must rapidly evolve new pollinator interactions to compete with existing species.