If you’re a bird, brood parasitism seems like a cushy reproductive strategy—lay your eggs in someone else’s nest, then sit back and let the inadvertent foster parents raise your kids for you. But what if they don’t raise you kids quite right? Could brood parasite chicks raised by parents of another species grow up a bit … confused? According to a recent study of brood-parasitic ducks, they can indeed [$a]. Redheads (above) sometimes lay eggs in the nests of canvasback ducks (below)—but redhead chicks raised by canvasbacks may not know what species they are. Photos by Nick Chill and meantux.

The new study examines redheads, a species of North American duck which frequently lays its eggs in the nests of other duck species, particularly the canvasback duck, which occupies much of the same range. Redheads are facultative brood parasites—in years when conditions produce lots of resources, female redheads lay eggs in other ducks’ nests as a supplement to their own nests; and in poorer years, they may lay only parasitic eggs [PDF]. Canvasback ducks, on the other hand, will lay eggs in the nests of other canvasbacks (which is not uncommon in birds [$a]), but don’t parasitize other species.

This sets up a nice behavioral experiment. In birds, species recognition may be due to varying degrees of nature and nurture—a male bird may recognize females of his own species by genetically-transmitted instinct, but he may also have to learn socially important songs or other behaviors from his parents and other adults. You might expect that redhead chicks have evolved to recognize their own species regardless of who raised them, while canvasbacks might be confused if they grow up around another species. 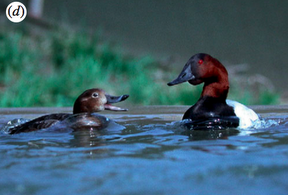 When the chicks had grown up, the authors offered the cross-fostered males access to females of both species, and recorded their interactions. It turned out that the brood parasitic rednecks were just as prone to species-confusion as the canvasbacks. Males of both species preferred to associate with females of the species with which they were raised, and directed almost all of their courting effort—displays of neck-arching and special calls—toward the species that fostered them. In fact, many of the cross-fostered males successfully formed mated pairs with females of the other species.

So why hasn’t redhead parasitism of canvasback nests broken down the reproductive isolation between these two species? The authors don’t have a clear answer, but note that the rate of observed hybrid couplings are much lower in natural populations than in their experimental setting. Social learning is a complicated thing, and life in larger, natural populations of the two species might not be well replicated in this study.