Science is often said to work in three easy steps: (1) observe something interesting, (2) formulate a hypothesis for why that something is interesting in the way it is, and (3) collect more observations to see if they also support that hypothesis. Wash, rinse, repeat, and you eventually get from Newton to Einstein, from Aristotle to Darwin.

Except, of course, it’s never that straightforward. Sometimes scientists come up with a hypothesis without a clear-cut example to support it, and then go looking that example. Sometimes observations that support a hypothesis turn out not to, if you look closer. And—here’s the funny thing—this can even happen with hypotheses that are, in the end, pretty much correct.

In the spirit of this month’s Giants Shoulders blog carnival, which focuses on “fools, failures, and frauds” in the history of science, I’m going to recount a case in which one of the greatest biologists of the Twentieth Century was fooled by a small desert flower. Sewall Wright was no fool or failure, and he certainly didn’t commit fraud, but he does seem to have been totally wrong about his favorite example of a particular population genetic process, one he discovered. That process, isolation by distance, is widely documented in natural populations today—but it also doesn’t seem to have worked the way Wright thought it did for Linanthus parryae.

Isolation by distance and Linanthus parryae

I’ve discussed isolation by distance before—it’s a population genetic phenomenon related to genetic drift, the random change in the frequencies of genes in populations when natural selection is weak or not acting altogether. When you play out the random evolution of genetic drift across space as well as time, you get isolation by distance—populations that are far enough apart evolve different gene frequencies just because it takes so long for migrants to move between them. IBD, as I’ll call it from here on out, is important to population geneticists because it gives us a “null” expectation, or baseline for comparison, to take to natural populations—if we see more differentiation in the traits or gene frequencies of two populations than we would expect under IBD, then we have reason to think natural selection could be creating that differentiation. 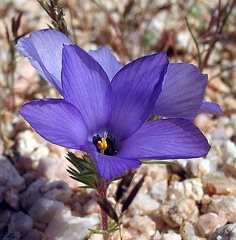 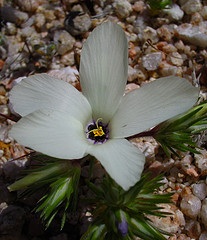 Are these little flowers a textbook case of genetic drift, or natural selection? (Flickr: naomi_bot).

Sewall Wright conceived of IBD in the midst of the Modern Synthesis, the period in the mid-Twentieth Century when biologists were putting together Darwin’s thinking about natural selection with Mendel’s discoveries in genetics, mixing them both with probability theory, and coming up with mathematical models of evolution that we still use today. Wright presented the math underlying IBD in a 1943 paper in the journal Genetics [PDF], as an extension of his earlier work on the effects of inbreeding, migration, and genetic drift.

But showing that something makes mathematical sense isn’t the same as showing that it happens in the natural world. Wright needed a concrete example of IBD in action, and he found it—he thought—in Linanthus parryae, a small flowering plant found in the Mojave Desert. Two other biologists, Carl Epling and Theodosius Dobzhansky (yep, that Theodosius Dobzhansky), had reported the previous year that there was something funny going on with the color of L. parryae‘s flowers [PDF]. The little plants, which flower briefly in the desert springtime, have either blue or white flowers. But meticulous surveys across 30-some miles of desert around Victorville, California, found no pattern as to which color of L. parryae grew where. Patches of the flowers were often all blue or all white, but lots of patches were mixed. Plants with each flower color grew in the same kinds of locations, as Epling and Dobzhansky noted:

No relation between the composition of populations of Linanthus Parryae and the environment in which these populations live is detectable. … the region studied is homogeneous both with respect to physical factors and with respect to plant associations. The boundaries between the variable and the predominantly white areas do not coincide with any perceptible migration barriers.

The only pattern Epling and Dobzhansky found was that patches of L. parryae were very likely to have frequencies of the two flower colors similar to other, nearby patches—and the correlation between color frequencies weakened as the distance between patches increased.

That pattern of decreasing similarity with distance is the definition of IBD. And so, directly after his paper introducing IBD, in the same issue of Genetics, Wright published his analysis of the strange case of L. parryae [PDF]. “It seemed of interest,” Wright wrote, “to make an analysis of [Epling and Dobzhansky’s] data from the standpoint of the theory of isolation by distance discussed in the preceding paper.” He fed Epling and Dobzhanky’s data into his newly-developed model of IBD, and concluded, with some caveats, that the observed variation in flower color frequencies “could be a by product [sic] of the development of different genetic systems by the process of random differentiation.”

So Linanthus parryae looked like the textbook case of isolation by distance, selected by the guy who thought up IBD in the first place. Except that, as Epling continued studying the little plant, he found some complicating factors. Specifically, that the frequencies of blue and white L. parryae flowers are predictable across time even as they were unpredictable across space [$a]. Over 17 years, Epling and his coauthors observed that the total number of flowering L. parryae shifted wildly from year to year, as they reported in 1960:

In 1941, Linanthus formed an almost continuous carpet over hundreds of square miles, resembling a light fall of snow amongst the Larrea bushes. In 1950, 1951, and 1959 it was completely absent from the region … Its dispersion, even in good years, is highly variable even over distances of a few feet.

Wild population size fluctuations like that should exacerbate the effects of genetic drift, because when the population size drops sharply—biologists refer to this as going through a “bottleneck”—the small sample of plants that survive is more likely to be unrepresentative of the pre-bottleneck population. But Epling and his coauthors found that the frequency of blue flowers was much more stable than the total number of L. parryae flowering from year to year.

In the soil of their study sites, they discovered thousands of L. parryae seeds waiting for the right conditions to germinate—a pretty common strategy for desert plants. In any given year, only a small fraction of this “seed bank” sprouted, so the effective population of L. parryae was much bigger than anyone had realized. “Our data suggest that the total population is sufficiently larger than the annual increment, on the average, that local deviations quickly subside to the norm, like a flattened wave,” Epling and his coauthors wrote. They concluded that this spatially variable, but temporally constant “norm” of flower color frequency was likely due to natural selection, although they couldn’t identify the source, or measure selection acting on the plants.

Natural selection over time and space

Figuring out what was going on with Linanthus would take direct measurement of natural selection associated with flower color. That analysis arrived more than four decades after Epling’s paper on the seed bank, when Doug Schemske and Paulette Bierzychudek set out to directly compare the fitness—the number of seeds produced—for L. parryae plants with blue flowers and white flowers. A patch of Linanthus parryae in Bradys, California, with both blue and white flowers. (Flickr: naomi_bot).

Schemske and Bierzychudek conducted an 11-year study of natural selection [PDF] on flower color at two sites where both white and blue L. parryae grow, including one of Epling’s original study sites. They found an interesting pattern: in years when few seeds were produced overall, blue flowers produced a larger proportion of the seeds. The overall seed production at Shemske and Bierzychudek’s study sites tracked with rainfall in March and April—so blue flowers seemed to have higher fitness in dry years, and white ones in wet years.

But the distribution of blue L. parryae flowers varies more across space than over time. Could natural selection also explain why pure-white and pure-blue patches occur, as Epling and Dobzhansky originally recorded, less than 500 feet apart? To answer this, Schemske and and Bierzychudek examined two such patches [PDF] on either side of a shallow ravine close to Epling’s study area. On one side of the ravine, L. parryae was almost exclusively white; on the other, it was all blue. To test whether selection or drift was responsible for this sharp white-to-blue transition, Schemske and Bierzychudek compared the differentiation in color frequencies to variation in neutral genetic markers (allozymes, actually, which are not exactly genetic) and sowed experimental plots on either side of the ravine with mixes of white and blue seeds.

So natural selection seems to be the cause of the blue-white divide across the ravine—over just a few tens of meters! But natural selection from what? Surveying a number of common Mojave desert plants (not, alas, my favorite one, Yucca brevifolia), Schemske and Bierzychudek found that many grew more densely on the side of the ravine dominated by blue L. parryae. A range of soil chemistry factors also differed on either side of the ravine. None of this directly identifies how flower color is connected to better performance on either side of the ravine for L. parryae, but it shows a range of detectable environmental differences at the same spatial scale as the white-blue divide. What do we gain from all this back and forth over the natural processes shaping the color of a diminutive desert plant? Wright’s ideas about isolation by distance have turned out to be highly important for studying the genetics of natural populations, even though he was wrong about the particular case of Linanthus parryae. But textbook examples are worth testing precisely because they’re textbook examples, and digging (literally!) into the natural history of Wright’s favorite example of IBD yielded new puzzles about these little blue-or-white flowers. Accumulating observations, designing new experiments, and testing what we think we already have figured out is how science expands our understanding of the world. It works—and, if I do say so myself, it’s usually fun getting there.