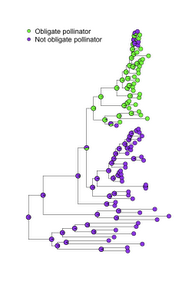 Phylogeny of the Prodoxidae, the family of the yucca moths, with a (very basic) reconstruction of pollinator life habits. Image by jby.

Late last night I made it back to Moscow from (mostly) sunny Santa Barbara, California, where I was lucky enough to attend a summer short course in phylogenetic comparative methods using R, sponsored by NESCent, hosted by NCEAS, and helmed by Luke Harmon and Mike Alfaro. I came into the seminar as a big fan of the programming language R already, and it was great to learn about a whole new range of tools available for the platform. It was even better to learn about those tools in a group of really smart colleagues, all of whom were thinking about how best to use R in their own projects. It was like a warm-up for the Evolution meetings, which start this Friday.

Like the meetings, one of the principal pleasures was learning about everyone else’s study organisms, the best example being the wrinkle-faced bat, which has the strangest trait I think I’ve ever seen in a mammal: a bald face, and a “mask” of furry skin it can pull over said face. Flickr has photos! I’ll put one below the fold in deference to the squeamish. Eat your heart out, George Lucas. Photo by Evets Lembek.