This post is the second in a special series about four fundamental forces in evolution: natural selection, mutation, genetic drift, and migration.

In order for populations to change over time, to descend with modification, as Darwin originally put it, something has to create the modifications. That something is mutation. A mutation of large effect? Photo by Cayusa.

A mutation is any change to an individual’s genetic code, whether caused by an external factor like radiation, or an error in the DNA copying that takes place every time an individual cell divides. However, not all mutations are created equal.

First and foremost, for a mutation to have any future existence beyond the individual in which it occurs, it must be in a cell that will go towards forming the next generation, a germline cell. In sexually reproducing species, this means sperm or egg cells, or the progenitor cells in the testes or ovaries that form them. Second, for a mutation to be “visible” to natural selection, it must have some effect on fitness, the number of offspring an individual carrying the mutation is likely to have. The genetic code determines how and when individual cells make proteins, and proteins determine phenotypes, the visible characteristics of living things. However, many changes to the genetic code don’t affect their carriers’ fitness. Mutations might be more or less neutral because

Neutral mutations are actually quite important for biological studies—DNA fingerprinting and population genetics studies rely on them. Their frequencies evolve at random, reflecting the history of the populations that carry them rather than the effects of natural selection. 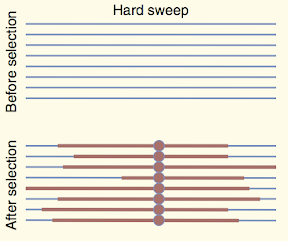 TOP: DNA sequences from a population are variable (blue) before a new mutation (red dot) arises; after it “sweeps,” every individual carries the allele as well as identical sequence nearby (red). BOTTOM: a figure from Linnen et al. (2009), demonstrates this pattern in deer mice. Images from Pritchard et al. (2010), fig. 3 and Linnen et al. (2009), fig. 4.

The variation introduced by neutral mutations—or, rather its absence—can help identify regions of the genome where selection is active. When a new gene arises by mutation, and it is strongly favored by selection, it can quickly spread through a population. In species that remix their genomes through sexual selection, the region of the genome containing a useful new gene can recombine into many different genetic backgrounds—but the closer a region of DNA is to the favored mutation, the less likely it is to recombine and separate from it. Thus, a region of the genome rather larger than the gene favored by selection is carried along until everyone in the population has the same DNA sequence.

When a new mutation takes over a population in this manner, it’s called a selective sweep, and the pattern it produces has been used to identify genes recently favored by selection in many different species, including humans. For instance, Linnen et al. documented reduced genetic variation in the neighborhood of gene variant responsible for light-colored fur in deer mice to demonstrate that it spread rapidly through the population after the mice colonized a region with light-colored sand.

Fuel for the engine of natural selection

Selective sweeps highlight how natural selection acts in opposition to mutation: mutation introduces new variation into populations, and natural selection causes the most fit variants to spread—potentially until the whole population carries the same trait. At the same time, selection requires variation in order to operate. If everyone is identical, then everyone has the same expected number of offspring, and the next generation will look just like the current one.

Because of this, natural selection can only operate as rapidly as mutation can introduce new variation from which to select. We know of specific cases in which selection seems to have “stalled” for lack of heritable variation. For instance, the fly Drosophila birchii lives in rainforest habitats along the northeast coast of Australia. Fly populations from the driest locations in this range have greater tolerance for dry conditions, but they also have virtually no heritable variation for drought tolerance [PDF]—and the authors suggest that this could limit the flies’ ability to evolve in response to climate change.

In other cases, though, biologists have found that mutation seems to provide new variation at least as fast as selection can remove it, leading to sustained, long-term evolution of experimental populations [PDF]. One important factor that may determine the outcome of this mutation-selection balancing act is actually the size of the population—more individuals means more opportunities for mutations to occur.

So the rate at which new mutations accumulate in a population depends on many factors, not the least of which are how you choose to measure that rate, and the fitness effects of the counted mutations. (Does a mutation “count” as soon as it occurs in a cell’s nucleus, or only when it has passed on to the next generation, or only when it has spread to everyone in a population?) Ultimately, populations evolve through a constant tension between the effects of mutation, natural selection, and the subject of next week’s Big Four force: genetic drift.