This post is the first in a special series about four fundamental forces in evolution: natural selection, mutation, genetic drift, and migration.

Among non-biologists, the best-known of the Big Four forces of evolution is almost certainly natural selection. We’ve all heard the catchphrase “survival of the fittest,” and that’s a pretty good, if reductive, summing up of the principle. In more precise terms, here’s how natural selection works:

Put this way, natural selection is simply a relationship between fitness, the number of offspring an organism can produce (often reported in comparison to the rest of the local population), and phenotype, the value of one or more traits of that organism (wing length, running speed, number of flowers produced, &c). Biologists can measure selection in natural populations by estimating this relationship between fitness (or a proxy for fitness, like growth rate), and phenotypes. Such an analysis should produce something like the regression graphs to the right, in which the relationship might be directional, with greater- (or smaller-) than-average phenotypes having greater fitness; stabilizing, with the average phenotype value having greater fitness; or disruptive, with extreme phenotype values having greater fitness. The slope of the line, or the shape of the curve, is a measure of the strength of natural selection [PDF] on an organism’s phenotype. This approach to measuring selection has been widely applied, and in 2001 a group of biologists led by Joel Kingsolver collected more than 2,500 estimates of the strength of natural selection [PDF].

How strong is selection?

Kingsolver et al. found that selection was usually surprisingly weak. Studies with the largest sample sizes, and the most statistical power to detect selection, mostly found directional selection strength (that is, the slope of the fitness-phenotype regression) less than 0.1, and the strength of stabilizing or disruptive selection was similarly low. Does this mean selection doesn’t matter in the short-term evolution of natural populations? Taking the finch by the beak

Part of the problem with assessing selection in nature is that most datasets measure selection over just one or a few years. One exception is the case of Darwin’s finches in the Galapagos Islands. The Galapagos offers a wide variety of habitat types, and experiences substantial year-to-year environmental variation—a landscape that should exert all sorts of natural selection on its occupants. Peter and Rosemary Grant have studied Galapagos finches for decades now, and found that selection is continuously at work on these unassuming birds. (The Grants’ book How and Why Species Multiply sums up their research program for a lay audience.)

Much of the Grants’ work has focused on the finches’ beaks, which largely determine what food the birds can eat. The distribution of seed sizes available on different Galapagos islands strongly predicts [PDF] the size of finches’ beaks on those islands. In 1989, the Grants published estimates of selection on beak size in the finch species Geospiza conirostris following a drastic wet-to-dry climactic shift that radically changed what foods were available to the finches. They found strong selection [$a], with fitness-phenotype regression slopes as high as 0.37. What’s more, the direction of selection changed dramatically from a very wet year to the dry year immediately afterward, as the finches were forced to move from feeding on small seeds and arthropods—which gave the advantage to shorter beaks—to hard-to-crack seeds, which required deep beaks.

The Grants’ longer-term study of selection on Galapagos finches confirms this image of selection swinging back and forth unpredictably [PDF]. From 1972 to 2001, they tracked populations of the finch species G. scandens and G. fortis, and saw both more gradual long-term changes in the finches’ body size and beak measurements as well as sudden sharp shifts. These changes continually altered the ability of the two species to hybridize, so that some years they were more reproductively isolated than others—and conditions in any one year were poor indicators of what would be going on five, ten, or twenty years later.

So when does selection matter?

The Grants’ study makes natural selection look as shifting and impermanent as the wind. How can it shape patterns of evolution over millions of years, then? One possibility is that trends may emerge over longer periods of time, as wobbly selection moves species in new directions in a drunkard’s walk, with two steps forward, then one step back, then four steps forward. Another is that lasting trends only occur when speciation intervenes to lock in fleeting changes due to variable natural selection [$a]. Much also depends on how selection interacts with mutation, genetic drift, and migration, as I’ll discuss in the rest of this series. 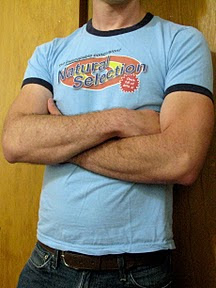 And here’s a shameless plug for a t-shirt. Photo by jby.

Grant, P.R. and B.R. Grant. (2008) How and Why Species Mutliply: The Radiation of Darwin’s Finches. Princeton University Press. Google Books.

6 thoughts on “The “Big Four,” part I: Natural selection”