Regular readers of Denim and Tweed know that I’m fascinated by the evolution of species interactions: interactions between plants and nitrogen-fixing bacteria, Joshua trees and yucca moths, parasitoid wasps and butterflies, and between ants and the trees they guard. I tend to think that coevolutionary interactions not only determine the health of natural populations, but shape their evolutionary history. But would I feel that way if I were a paleontologist?

Running just to stay in place

The idea that interactions between species matter goes all the way back to the origins of evolutionary biology in the writing of Charles Darwin:

What a struggle between the several kinds of trees must here have gone on during long centuries, each annually scattering its seeds by the thousand; what war between insect and insect – between insects, snails, and other animals with birds and beasts of prey – all striving to increase, and all feeding on each other or on the trees or their seeds and seedlings, or on the other plants which first clothed the ground and thus checked the growth of the trees! (On the Origin of Species, 1859: 74-5)

This image of constant struggle among living things was more formally encapsulated in a 1973 paper by Leigh Van Valen (which paper is not, alas, available online), who proposed that constant coevolution with other species should mean that natural populations of living things are constantly adapting – in response to competitors, mutualists, predators, parasites – without gaining ground in the struggle, because the other species are also adapting. Van Valen lifted an image from Lewis Carroll’s Through the Looking-Glass, in which the Red Queen tells Alice that, in the strange world of Looking-Glass Land, “… it takes all the running you can do, to keep in the same place.”

They were running hand in hand, and the Queen went so fast that it was all she could do to keep up with her … The most curious part of the thing was, that the trees and the other things around them never seemed to changed their places at all. 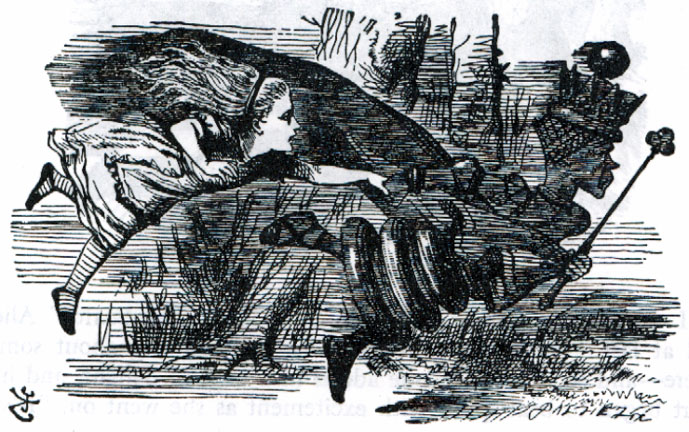 “… it takes all the running you can do, to keep in the same place.” Image from Through the Looking-Glass, via VictorianWeb.

Thus, this idea that fuels much of my research, and a great deal of scientific study over the last three decades, is often identified with the Red Queen. What is interesting about this result is that Van Valen wasn’t interested in species interactions as such; he was trying to explain a pattern in the fossil record – that, for a wide variety of living things, the probability that a species would go extinct was independent of its age. That is, species that have been around for ten million years are no better adapted to their environments than species that have just formed; the probability of extinction is constant.

Van Valen’s explanation for this result was that something must constantly act to prevent living things from becoming better adapted, and better able to resist extinction, over time – specifically, the Red Queen’s race against other living things. Whenever a species “loses” the race, it goes extinct, regardless of how long the race has been up to that point. A similar pattern applies to the creation of new species – if coevolutionary interactions often help create reproductive isolation, then new species should also form at a roughly constant rate [$a]. Since this is what we observe, many biologists conclude that coevolution is responsible for the diversity of life on Earth.

What if the race doesn’t matter?

Fortunately for the advance of knowledge, however, not all evolutionary biologists have the same perspective. Paleontologists, for instance, tend to think that the year-to-year dynamics of the Red Queen race don’t make much difference in the longer run, over millions of years. They’d argue that most of the evolutionary change induced by coevolution between species is too variable and fleeting to have much effect on the rates at which species are formed and go extinct. Under this view, random geological events – continents splitting, mountain ranges rising, volcanoes erupting – are more likely to create new species and force them to extinction. This competing model should also lead to a roughly constant rate of species formation and extinction, but it predicts a different pattern of variation around that constant rate than the coevolutionary Red Queen does. If most speciation and extinction events are caused by coevolution, then the time periods between speciation events should follow a normal distribution – forming a “bell curve” with most periods close to the average length, and symmetrical tails of longer and shorter periods of time. On the other hand, if many different, individually rare geological events are the most common cause of speciation and extinction, the periods between speciation events should follow an exponential distribution, with most periods being shorter than the average, but a long tail of longer periods as well.

This contrast is the crux of a study recently published in Nature. The paper’s authors, Venditti et al., examined 101 evolutionary trees estimated from genetic data, including groups like the dog family, roses, and bees. For each group’s evolutionary tree, they determined the distribution of the lengths of time periods between speciation events. A majority of the trees – 78% – supported the exponential model. That is, 78% of the groups of organisms examined had evolved and diversified in a fashion best explained by geology, not coevolution. None of the groups fit the normal distribution, and only 8% fit the related lognormal distribution.

This result suggests that within many groups of organisms, the physical environment is a more common cause of reproductive isolation or extinction than the biological environment. However, this isn’t to say that species interactions don’t matter. As Van Valen originally noted, extinction rates may be roughly constant within large groups of organisms, like those examined by Venditti et al., but those constant rates vary from group to group. These differences in rate may still depend on species interactions, because species interactions can shape how prone a population is to reproductive isolation.

For instance, a group of plants that has lousy seed dispersers may form new species in response to much smaller, and more common, geological barriers than a group of plants whose seeds can travel for hundreds of miles. Additionally, species interactions that promote diversity within the interacting species may mean that when geology creates isolation, the resultant daughter species are more different from each other than they would otherwise be, and less likely to re-merge if they come into contact again. Under that scenario, speciation caused by the physical environment would act to preserve variation [$a] created by the biological environment.

So, perhaps the Red Queen doesn’t operate the way we thought she did, with constant coevolutionary races spinning off new species and killing off others. But that hardly means that Red Queen processes don’t matter in the long run.

9 thoughts on “Dethroning the Red Queen?”