Many insects in the order Hemiptera – the “true” bugs – have evolved a way to hire their own protection by excreting sugary “honeydew.” Honeydew attracts ants, who tend honeydew-producing bugs like livestock, protecting them from predators and even disease. Honeydew is cheap to make because honeydew producers typically make a living sucking the sap of their host plants; they’re trading sugar and water, which they have in abundance, for safety. 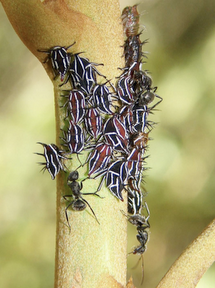 But there’s a catch. Ants make good bodyguards because they are carnivorous – and they’re perfectly willing to start eating their flock. A natural history note in the latest issue of The American Naturalist suggests that one group of ant-protected bugs deals with this problem by cloaking themselves in chemicals that make the ants think they’re part of the host plant [$a].

The study’s authors determined that organic compounds on the cuticle of the honeydew-producing leafhopper Guayaquila xiphias, which is often tended by the ant Camponotus crassus, were similar to compounds on the surface of the leafhoppers’ preferred host plant. They presented ants with freeze-dried leafhoppers whose cuticles were washed clean with solvent, and found that the ants were much more likely to attack washed leafhoppers than unwashed ones; the ants were also more likely to attack leafhoppers they found on plants other than the preferred host. Finally, the authors replicated the earlier experiments using moth larvae coated with leafhopper cuticle compounds, and found that the “chemical camouflage” conferred the same protection on a different insect species.

This neat result shows how hazardous honeydew-producers’ relationship with their ant bodyguards can be – they have to hide from the ants even as they offer them an inducement to stick around!