In a paper just released online at Molecuar Ecology ahead of publication, genetic tests on moth larvae provide the latest piece to the puzzle of why there are two kinds of Joshua tree — because the tree’s pollinators need to match its flowers [PDF].

I’ve written extensively about the interaction between Joshua tree and its pollinators. Like all yuccas, Joshua tree is pollinated only by yucca moths. Female yucca moths collect pollen in special mouthparts and deliberately apply it to a yucca flower after laying eggs inside it. When the eggs hatch, the moth larvae eat some of the seeds inside the developing fruit. Yuccas prevent their pollinators from laying too many eggs by selectively killing flowers too badly damaged by egg-laying [$-a]. 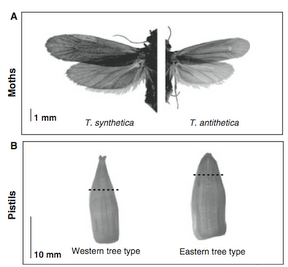 TOP: The two forms of Joshua tree (western type on left, eastern on right). BOTTOM: Scaled comparison of moth body sizes and tree pistils. To lay eggs in a flower, moths must drill from near the top of the pistil to the positions marked by dotted lines. Photo by jby, Illustration from Smith et al.(2010), figure 1.

This last element of the interaction may have had significant consequences for Joshua trees’ evolutionary history. Joshua trees are pollinated by two different species of moths, which occur in different parts of the tree’s range: the larger Tegeticula synthetica in the west, and the smaller T. antithetica in the east. Joshua trees pollinated by the two different moth species are themselves different, both in their overall shape, and in the shape of their flowers’ pistils — specifically, the length of the route that a moth must drill to lay her eggs [PDF].

How does this difference in flower shape affect Joshua tree pollination? If a larger moth attempts to lay eggs in a smaller flower, it may be do more damage to the flower than the “native” pollinator would, triggering the tree to kill the flower. On the other hand, smaller T. antithetica might be able to lay eggs in a larger western-type flower without this risk. If this is the case, moths probably can’t pollinate western trees with eastern pollen, but they might be able to do the reverse.

Such one-way pollen transfer between the two Joshua tree types could produce a population genetic pattern called “chloroplast capture.” Joshua tree pollen doesn’t contain the full genetic code of the tree that produces it — it lacks the genes contained in the chloroplast, the cellular structure that conducts photosynthesis, because pollen grains typically don’t have chloroplasts. The DNA in the cellular nuclei of newly-formed seeds is a mixture of nuclear DNA (nucDNA) from a pollen grain and from one of their “maternal” parent’s ovules, but they get all their chloroplasts, and chloroplast DNA (cpDNA), from the ovule. If moths carry pollen from eastern trees to western trees, then the seeds produced would contain western cpDNA, but also some eastern nucDNA. 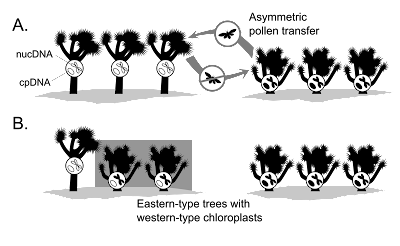 This is what we’ve found in Joshua tree populations near the region where the two tree types and their pollinators come into contact. At these sites, trees look like the eastern type (meaning they likely have eastern nucDNA, though we haven’t tested that yet) but have cpDNA that matches nearby populations of western-type trees [PDF].

The genetic pattern is only suggestive of one-way pollen transfer between the two Joshua tree types, though. We haven’t yet tracked the movement of moths directly, or estimated whether they actually are less successful when laying eggs on the wrong tree type. The newly-published study provides exactly these data. My colleague Chris Smith placed glue traps on Joshua tree flowers at the contact zone to estimate how often adult moths of each pollinator species visited each type of tree in the mixed population. Adult moths were more likely to be trapped on their “native” trees, though they did show up on the other type sometimes. A yucca moth larva emerges from a Joshua tree fruit in the lab. Photo by jby.

Chris and I then collected fresh fruit from trees in the contact zone, and caught yucca moth larvae as they chewed their way out. Chris and another coauthor, Chris Drummond, then identified the species of each larva based on their genetics (the two pollinators look very similar at that stage) — and in our sample, the pattern of specificity was even stronger than that in the adults. The larger moth species, T. synthetica, never emerged from fruits of the small-flowered eastern trees. The vast majority of larvae of the smaller T. antithetica were also found inside their “native” tree’s fruit — but a handful did emerge from large-flowered western trees.

This mechanism could create the genetic pattern we see in Joshua tree populations. Larger T. synthetica doesn’t seem to lay eggs in (or pollinate) small-flowered eastern trees, but smaller T. antithetica can occasionally lay eggs in (and pollinate) large-flowered western trees. This should create asymmetric gene flow, with pollen moving from eastern trees to western trees, but not the reverse. The two Joshua tree types may not yet be reproductively isolated, separate species — but we won’t know for sure without looking at the plants’ nuclear DNA. As it happens, I’m working on that right now.

2 thoughts on “For yucca moths, does (flower) size matter?”