So I’ve been putting off a final post-mortem on the use of online resources in connection with Evolution 2009, but Nature finally shamed me into it with an article specifically about blogging and microblogging at scientific meetings as part of a special section devoted to science journalism.

The Nature piece captures the concerns that came up when I first broached the subject of trying to increase the meetings’ online profile, especially the question of unwanted publicity: scientific meetings often serve as forums for presentation of work in progress — ideally, you’re hoping there will be people in the audience with interesting ideas for how to proceed — and presenters don’t necessarily want unfinished work broadcast all over the globe. Most obviously, there’s the (I would say slightly paranoid) fear of getting “scooped” because a rival reads about your work on a blog and kicks into high gear to publish first.

It’s not clear to me, however, that blogging really increases this risk; the people most interested in a given scientist’s work, and therefore most likely to work on similar things and potentially scoop her, are probably already in the live audience. And, furthermore, as the Nature piece points out, online coverage of work in progress could actually serve to establish priority in case of a real dispute. In any event, scientific societies are already adapting:

Conference organizers contacted by Nature had a wide range of policies on social networking. Many societies have banned digital photography in talks and poster sessions and some consider bloggers to be members of the media and subject them to certain reporting restrictions. …

Journals are also pondering how best to handle social networking at meetings. Nature generally supports social media tools, says Philip Campbell, Nature‘s editor-in-chief. And as long as it’s not a deliberate attempt to hype a new finding, he says that researchers should feel free to talk to colleagues who blog or twitter.

Blogging is increasingly recognized as a great way to communicate science to the public, and it seems likely we’ll see it become well-integrated into scientific meetings. Online coverage of Evolution 2009 was, I’d say, a good start. The page I set up to aggregate posts about the meetings drew 15 posts from 6 blogs, with most posting (12/16) occuring during the meetings. I’m still adding to that page as followup posts appear on participating blogs. If I had to organize that page again, I think I’d look for a better — maybe even automated — way to locate and link to posts. The volume wasn’t so much that I couldn’t handle it by monitoring a few RSS feeds myself; but I assume that blog coverage will increase in future years. 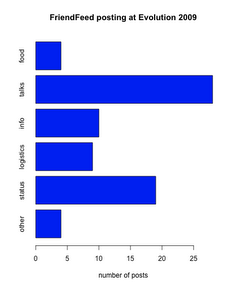 The FriendFeed I set up for the meetings drew less traffic than I’d hoped; 15 subscribers, and 74 contributions from various sources. I’ve broken down FF posts by topic in the graph on the right. In general, people used the FriendFeed about as I’d have predicted. They posted reactions to talks;

their own status during the meeting;

back from birding, time for some talks #E09

and, yes, they complained about the catering.

@mlabrum coffee seems to be a prohibited substance in Moscow. #E09

Fortunately conference coordinator Darrell Keim kept an eye on the feed, and was able to respond in some cases.

What we didn’t see much was back-and-forth discussion, as described at the 2008 meeting of the International Society for Computational Biology. A lot of this, I assume, is down to (1) the fact that computational biologists are more techy than your average evolutionary biologist, which contributed to (2) comparatively low subscription to the FriendFeed. I set the dedicated feed up just before the meeting, too, so there may not have been a lot of awareness that it was available until later. Traffic to the meeting website peaked the day before the meetings started (at 658 unique hits), and it takes a good lead-in to draw participation to something new like this. The official Twitter feed attracted 93 subscribers, and I linked to that from the main page very early on.

This meeting also saw the first webcast of any meeting activities — specifically, and appropriately, Eugenie Scott’s lecture on communicating science to the public. It wasn’t live, but it’s a start. Next year, it’d be great to see all the “flagship” lectures — the societies’ presidential addresses, maybe some of the symposia given by societal award recipients — put online.

This was all, as I have now said repeatedly, a good start. No previous Evolution meetings (to my knowledge) have aggregated related blog posts, or provided a near-real-time forum for reactions and discussion, or posted video from a major public lecture. I expect that the value of these resources will only increase as more people use them — we’ll have to see how things work out next year, in Portland, Oregon.