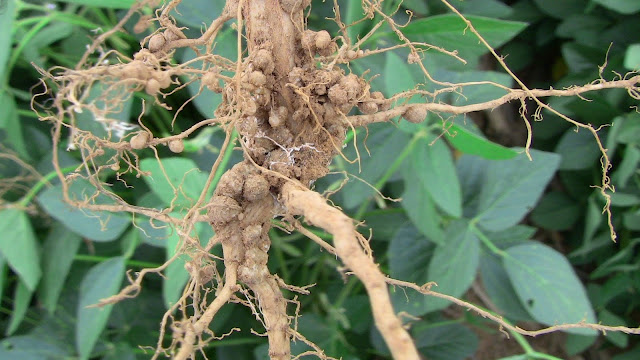 Striking up a symbiosis

The exchange of nutrients between plant and rhizobia requires close contact—the plant must, essentially, allow itself to be infected. This is accomplished via a series of chemical signals between plant and bacteria [$a]. Rhizobial bacteria, which normally live freely in the soil [PDF], respond to secretions by legume roots with their own secretions, called Nod factors. One of the host plant’s root hairs responds to Nod factor by curling around the bacteria, which are then able to form an “infection thread,” tunneling into the root itself. 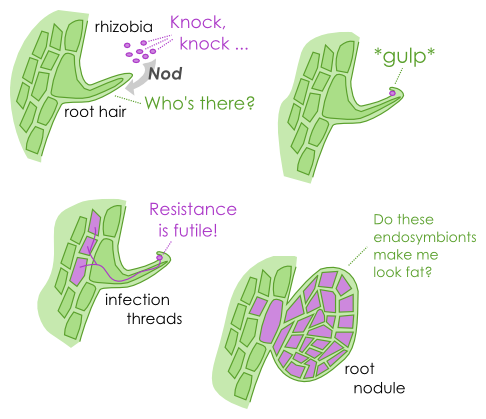 Inside the root, the infection thread branches into individual root cells, which respond by engulfing rhizobia and containing them in a symbiosome, a compartment separate from the rest of the cell. As more cells engulf rhizobia, they also proliferate, forming a knob of rhizobia-containing tissue that is eventually visible as a nodule on the root.

The payoff for the plant is immediate, as the rhizobia in the symbiosomes process atmospheric nitrogen into useable form. Fed by the sugar supply from the plant, the rhizobia reproduce rapidly inside the nodule tissue, and when the nodule senesces, many more copies of the original lucky rhizobium cell are freed into the soil. Obviously the plant would be better off hosting rhizobia that produce a lot of useable nitrogen in exchange for the sugar, and the rhizobia are better off if they spend more of that sugar on making more rhizobia and less on fixing nitrogen.

You’d think that plants could win out in this conflict of interests [PDF] by refusing to form nodules with selfish strains of rhizobia. Not so much [$a]. It turns out that lots of free-living rhizobia can make the signaling molecules necessary to prompt nodule formation, without necessarily being good at nitrogen fixation. The Nod factor is a password that both helpful rhizobia and freeloaders know.

Turning off the lights

However, rhizobia inside the nodule are more or less at the mercy of the plant. So maybe the host plant doesn’t need to be picky about who it lets in, so long as it can deal with low-quality rhizobia that know the Nod password. And it does seem that legumes can make life in the nodule less profitable for rhizobia that don’t play nice.

In 2003, Toby Kiers, Robert Rousseau, Stuart West, and Ford Denison demonstrated plant retaliation—or sanctions—in one of those studies that combines importance and simplicity it a way that actually makes it appropriate for Nature, which is where it was published. (Disclosure: Denison now works down the hall from my office at the University of Minnesota, and his response to my previous writing on this subject prompted this post. But it really is a nifty bit of science!)

The team’s central experiment forced cooperative rhizobia to stop cooperating [PDF] by growing the host plant—soybean—and its nodules in an artificial atmosphere with biologically useless argon swapped for the nitrogen that the rhizobia would otherwise fix. Soybeans have reasonably big root systems and nodules, so Kiers et al. were able to isolate either the whole plant, half its root system, or even individual nodules in the argon atmosphere.

They tested the same strain of rhizobial bacteria in both a natural nitrogen-containing atmosphere and the argon atmosphere, and found that, with no nitrogen to fix, the rhizobia fared substantially worse. Plants, half-root-systems, and even individual nodules all contained fewer bacterial cells when grown in the nitrogen-free atmosphere. When plants had a “choice” between nodules that could fix nitrogen and nodules that couldn’t, the nitrogen-fixing nodules grew larger.

The experiment also suggested how the plants were limiting rhizobia growth in the non-fixing nodules: by cutting off not their food supply, but their oxygen. Nodules grown in the argon atmosphere developed lower levels of oxygen-saturated leghemoglobin—a plant protein that carries oxygen, like hemoglobin—over the course of several days. Leghemoglobin concentrations inside nodules are high enough to turn the tissue pink, to supply oxygen to the rhizobia; but apparently if the rhizobia don’t do their job, the host plant cuts off their oxygen, like a landlord dealing with deadbeat tenants by turning off the power.

Kiers, Rousseau, and Denison followed up with a study showing that plant sanctions don’t seem to be binary, either—plants responded to a graduated series of atmospheres with less and less nitrogen by being less and less hospitable to their rhizobia [$a]. So now you may think that plants are pretty much in control of the nitrogen-fixation deal. But if that’s the case, the favoritism plants show for cooperative strains of rhizobia should create strong natural selection in favor of those strains. Why, then, are there any uncooperative rhizobia left?

First and foremost, it may be that life in the soil outside nodules is as good, or almost as good, at selecting for uncooperative rhizobia. Not a lot is known about what exactly rhizobia do when they’re out in the soil, although strains that are unable to prompt nodulation at all have been found to substantially outnumber the nodule-forming strains [PDF] in one (rather old) study of rhizobia in the “wild.” That certainly indicates that rhizobia can do just fine without ever climbing inside a plant.

Another possibility is that variation in the effectiveness of rhizobia is matched by variation in the sensitivity with which host plants trigger sanctions. Katy Heath has conducted a series of experiments using multiple genetic lines of a host legume, Medicago truncatula, and multiple strains of its rhizobial bacteria. (Heath worked in collaboration with my postdoctoral mentor, Peter Tiffin, who is a coauthor on several of the papers reporting these results.) Heath’s experimental pairings of plant line and rhizobia strain [PDF] found considerable variation in the outcome of individual pairings.

That success or failure of pairings between particular plant lines and rhizobium strains also changes with environmental context, Heath has found. She and two coauthors grew experimental plant-rhizobia pairs in soil enriched with three different levels of nitrogen fertilizer, and found that a plant line’s likelihood of forming nodules with a particular strain of rhizobia could completely change in a different nitrogen environment [PDF]. That makes sense, really: the relative costs and benefits of hosting rhizobia should change significantly if there’s enough nitrogen in the soil already.

This variation in genetic compatibility between host plant and rhizobia, and variation in the variation with different environmental conditions, is the rule in the world outside the greenhouse. That may ultimately be the answer to the question of why some rhizobia are lousy at fixing nitrogen—because the benefits of cooperating depend on the available host and the environment in which they meet. Natural selection is all about who’s most fit for a given moment in time at a particular place, and if times and places are different, plants and rhizobia may stay variable just trying to keep up with the changes. And, of course, as it tracks the moving target across the shifting landscape of the natural world, natural selection has to contend with genetic drift and deleterious mutation, too.

All of which is to say, there may be quite a lot going on that we don’t know about—or, in other words, plenty of work left for those of us who study plants and rhizobia. ◼

Thanks to Ford Denison for prompting this post with the above-mentioned e-mail exchange. I’m hoping to interview Ford for a future post; he blogs at This Week in Evolution, and if you don’t follow his writing there, you really, really should.